How well do you know your musicals? Can you recognize them if given only a partial picture? Take the quiz below and find out.

Each of the dance routines debuted in a movie released in August or September of its year. Guess whose legs they are. Then give yourself a bonus if you can name the movie. 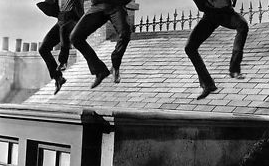 Hint: This is a publicity shot; the actual movie was filmed in color. 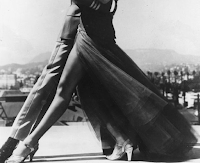 All is Quiet on the Blogging Front 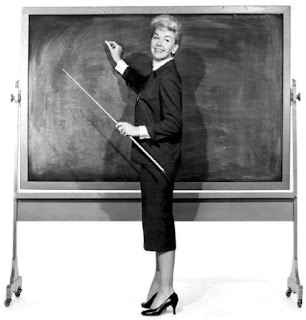 Armed with an arsenal of tech tools, Kleenex boxes, and freshly sharpened pencils, I returned to the classroom front mid-August. Before the natives arrived, I revised lessons, dusted and arranged furniture, designed bulletin boards, hung up inspiration posters, and sat through the annual workplace safety, anti-harassment, and bloodborne pathogen training videos. This time around, I also took on another front--a night class at the community college, which meant additional planning and more videos. While this is a great opportunity, it also means, in the words of Johnny Mercer, "Something's gotta give." For me, that something is the amount of time I spend on Classic Reel Girl.

This is by no means a letter of adieu. Over the next several months, it will be quiet around here, but I'll still be around, #TCMParty-ing and sharing interesting articles via my Twitter feed @ClassicReelGirl. My extra assignment has not interfered with picking up new-to-me movies and revisiting old ones--just with the time spent writing about them.


My Viewing Journal and other things...

*Unfortunately, I had to forego the opportunity to write about the fabulous Female (1933) starring Ruth Chatterton for both the Anti-Damsel Blogathon and Danny's (of Pre-Code.com fame) The Pre-Code Companion. Each time I watch this movie, I fall more in love with it. I will eventually write about the film, but when I do, I want to make sure my prose does it justice. Right now, my writing would have been rushed.

*On my quest to watch all things taxi-dancer, I finished Lucille Ball's Lured (1947) in early August. At this time, the post is outlined and partially written.

*I started a drama club, in which I expose students to the classics during lunch. Our first theme is "It's a Stage Life." What better way to begin than with a backstage musical in glorious Technicolor: The Band Wagon (1953) starring my pal Fred Astaire. While this is not one of my favorites, I can appreciate it for what it's worth. No need for my personal opinions to interfere with students' education. Next up: 1937's Stage Door.


*Thanks to TCM's Debbie Reynolds Sunday (Aug. 23), I had the opportunity to see Bob Fosse dance in Give a Girl a Break (1953) and The Affairs of Dobie Gillis (1953). When I was growing up, Fosse was an intangible dance legend. It was a real treat to see him in action. I found his style athletic and very Gene Kelly-ish. Dobie Gillis was especially cute and not at all what I thought it would be based on the TV series of the same name. Pure fluff, but fun. I'd watch it again.

*I caught one movie during TCM's Gary Cooper Sunday (Aug. 30)--one that I wasn't intending to watch in whole, but sometimes you get sucked in and to heck with the laundry... The movie was Love in the Afternoon (1957), which I had not seen in its entirety in years. It was fresh on my mind as I had been contemplating societal attitudes towards free-loving females (Alice Drake in Female) versus males (Cooper's character in Love in the Afternoon) for my Female article. Soon social messages were pushed aside as the music and Audrey's costumes swept me away. From casual to formal, Audrey's style was classic. I also love that she had a normal size foot (the scene where Cooper hides her shoe reveals this)--she is one of us! 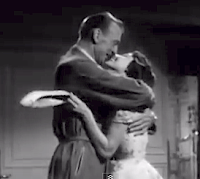 *I finally got around to John Huston's Across the Pacific (1942), which has been on my DVR for months. This film reunites Humphrey Bogart, Mary Astor, and Sydney Greenstreet who found great success together in 1941's The Maltese Falcon. Their chemistry works again, and it is enjoyable to watch the three actors feed of each other so well. Innuendos fly. (In fact, I was surprised some got past the censors.) The ending feels overdone, almost as though the writing became self-conscious of itself and world events. Research after viewing the film confirmed this. According to Mary Astor's autobiography, the plot, which detailed a Japanese invasion of Hawaii, was changed when Pearl Harbor was actually bombed (TCMDb). To be honest, I'd still watch the film again if only to catch the juicy lines of dialogue.

*For years I have been trying to sit down and watch The Pirate (1948), and I almost did last week. Instead, I mainly caught the dream sequence. All I have to say about that is: Gene Kelly's thigh. Did you get a load of how large it is?? Whoever says dancing is not a sport is mistaken. He could easily take on a football player or WWE wrestler. (Isn't WWE wrestling a choreographed dance anyways? Just sayin'...)


*In honor of the start of a new school year--and my obsession with Anne Shirley movies the last several years, I caught Sorority House (1939) on WatchTCM's On Demand. It is a sweet, fluff story. The biggest point of interest was the message at the end of the film which alluded to Nazi Germany. Shirley's father (J. M. Kerrigan) advises his daughter and her friends:

Just take care of yourselves. Strikes me that most of the grief in the world today is caused by people acting just like you youngsters. Forming cliques and hating everybody else. Now call it what you will. Sororities, clubs, states, or even nations. Nobody has that right. To go about telling the other fella what he ought to do. Live and let live. Let that be your motto.

His speech gives us a peek into the American attitude toward World War II before we were directly involved. We knew something bad was occurring over there, but we were not yet willing to fully face the problem--just take care of ourselves.


*Central Park (1932) caught my eye when I saw Joan Blondell starred in the film. What can I say? This was a miss for me. Blondell was beautiful as usual and played a likeable character. Her co-star (Wallace Ford) was not too bad either. I especially liked when his hair fell out of place in a kind of 1990s 'do as he washed the motorcycles. His character hailed from Arizona (shout out to all my AZ family) as evidenced by the stereotypical cowboy hat and boots. Then the weirdness ensued. There was an escaped lunatic zookeeper (John Wray) and police officer (Guy Kibbee) who seemed to have very little to do with the main story, but given equal time as the Blondell/Ford plot. Not sure what happened with the screenwriting. It was as if the pages of two screenplays accidentally got mixed together... Very odd.


*I'm still finishing September Star of the Month Susan Howard's They Won't Believe Me (1947) which Theresa of CineMaven recommended to me after reading my Out of the Past post. I keep falling asleep because I want to watch it when it's quiet (i.e., the kids are in bed, so it's late at night). So far it is a good one! Thank you, Theresa, for the recommendation.