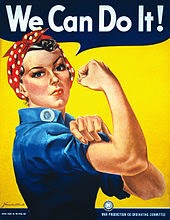 The 1940s were a unique time for the career girl. From 1942 to 1945, the boys were away at war which left a large gap in the workforce. Campaign posters, such as the one that came to be associated with Rosie the Riveter, encouraged women to take men's vacant spots. Whether or not this caused a switch in career girls and marriage on film is difficult to say. The first movie on my list was released prior to the war while the final film made its debut at the end of the decade. In any case, viewing a married career girl on screen would not have been as big of an anomaly as the decade prior. Although much more subtle, the message that career girls and marriage don't mix continued to be sprinkled throughout the '40s with some revolutionary gems popping up here and there. 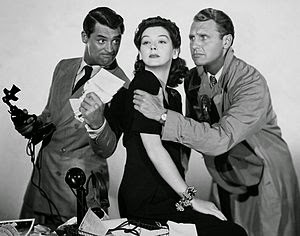 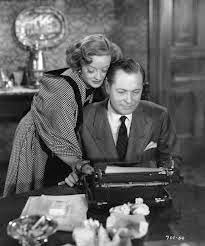 Going through the list of films this week, there are a few examples of women who were able to have successful careers and be happily married. Hildy (we assume), Tess, and Amanda. (Shout out for Rosalind Russell's and Katharine Hepburn's strong women roles!) Being a mother--and a working one at that, I couldn't help but notice something, er, someone missing from the equation: children. I wonder, would all have ended well if these women had a brood to raise at home? Or would we see a shift in the message--career and marriage can occur from time to time, but never with children? Another message worth exploring later down the road.

Join me next week as I continue to explore Career Girls and Marriage during the 1950s.
Posted by Bonnie at 11:16:00 PM No comments:

Sometimes the occasional rogue woman will try to "live like a man," finding contentment in her career. This week I examine what happens in a pair of films from the 1930s.

Join me next week as I continue to explore Career Girls and Marriage during the 1940s.

Every Girl Should Be Married

For better or worse, movies have been telling us that matrimonial bliss is the key to true happiness. More specifically, it--along with children--are the only way for a woman to be truly fulfilled. Men, on the other hand, might be content to live out their bachelor lives, finding satisfaction in their careers and multiple visitors in their beds. Therefore, the message goes, it is up to the woman to resort to trickery to help her chosen mate realize domestic bliss. A few examples through the decades:


In 2003, the whimsical Down With Love paid homage to this favorite movie plot of yesteryear, that of the great lengths women go in order to snag a husband. At the same time, it is poking fun too. *spoiler alert*

We find out the events that have unfolded throughout the movie are part of Barbara's (Renee Zellweger) elaborate scheme to entrap Catcher Block (Ewan McGregor). This updated version contends with another factor, though: her career, which is put on equal footing with--if not higher than--marriage. Well, almost... Come back next week for a look at Career Girls and Marriage.
Posted by Bonnie at 11:26:00 PM No comments:

Dance and Art in An American in Paris 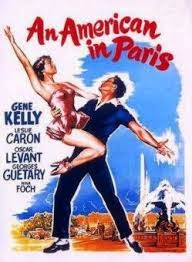 I understand people questioning the film's worthiness to belong to such illustrious lists as those put forth by AFI. The first times I watched the movie, I wanted to skip the big production at the end of the film and get to the final kiss. But then, I was in my early teens and impatient. I loved every musical I had ever seen, so it really bugged me that I didn't get the big deal about this one. So what did I do? What any classic-loving-girl would do: I watched it again. And again. And again. Maybe not repeatedly all in one sitting. Not even all in one month or year. But I persistently returned to the film at different points of my life. And you know what? Age helped me appreciate the musical in ways that I had missed during my first viewings.

Over the years I have developed my own theory as to the significance of the film's last elaborate dance sequence--a theory that I tried unsuccessfully to back up with research, so maybe it's all in my head. But what I did discover during the research phase proved the artistic importance of the number nonetheless. Vincent Minnelli (the director) and Gene Kelly (the star and choreographer) intended the final ballet sequence to represent Paris as seen through a painter's eyes. Great care was taken in creating backdrops and costumes that reflected the various Parisian painting styles: 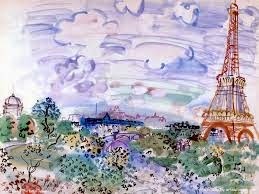 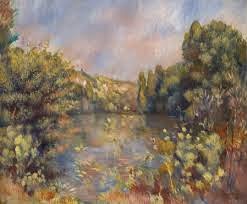 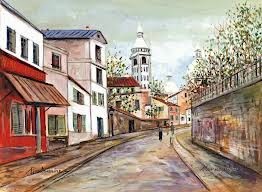 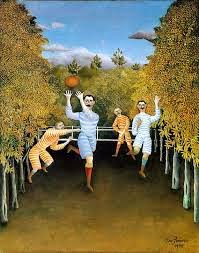 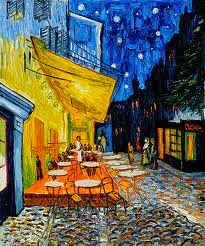 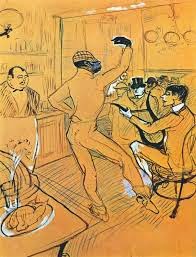 In Cinema and Painting: How Art is Used in Film, Angela Dalle Vacche gives a convincing argument that the dance is symbolic of Jerry's inner turmoil over his identity as a painter. He is at a crossroads--does he accept the aid of a lady benefactress or continue to be a starving artist? The ballet, a dream-like sequence, gives us and him the answer. Lise represents Parisian art; she is Rousseau's gypsy girl in one part of the ballet and Toulouse-Lautrec's Jane Avril in another. By falling in love with her, Jerry chooses art over "the entrepreneurial aggressiveness of [the American] Milo" (27), which is represented by the women in red and white who chase him. (Even Milo's name suggests the statue, Venus de Milo, cold and without feeling.) Vacche reasons that this "suggests that an American male can be a painter in Paris as long as he marries a French girl" (27) although she admits the movie "does not completely resolve the rivalry between art and love, between unbound male creativity and the routine to which marriage leads" (17). Even in marrying a French girl, he is married.

According to Vacche, "Minnelli and his collaborators did not conceive the ballet as a story with a clear, logical development but as a series of psychic associations" (22). However, long before the convenience of the internet, I came to a different conclusion about the final dance production. Kelly typically tells a story with his dance routines, so it is certainly possible that his choreography had more of a plot than Vacche attributes to it. I saw the ballet as a retelling of the main characters' (Lise and Jerry) romance via dance. It begins with Jerry running through Paris finding and "dancing" with scarlet women (symbolically dressed in red) until he finds Lise, the rose among the flowers. She evaporates, leaving his arms full of a flowers. The dance transitions to innocent giddiness when he finds Lise again, Jerry in his straw hat with his fellow GIs and Lise with her schoolgirl friends. This is followed by a sensual dance, symbolizing the passionate side of romance. But I kept getting stuck on that white-clad version of Jerry with his silly hat. Then one year, I thought I finally figured it out...

This may get a little radical for some. Be forewarned. I realize now that Kelly is dressed as Chocolat and Caron as Jane Avril of Toulouse-Lautrec's paintings, but Kelly's choreography (we're talking all of the dancers' movements here) along with his and the women's costumes make it look like he may be representing a part of Lise and Jerry's relationship that could not have been shown under other circumstances. Watch it and see if you get what I mean.

Pay no attention to the title of the YouTube Video.
I am not alluding to Kelly's derriere.

The number says what the plot could not in those days of heavy censorship. As an added bonus, I discovered per IMDb, Leslie Caron mentioned that the censors had a problem with an earlier number in which Caron's character danced--in their eyes--a little too suggestively with a chair. A TCM article by Scott McGee also mentioned Kelly had trouble with censors in regards to her flapper outfit in the same sequence. With the last number, I believe he got the last laugh.
Posted by Bonnie at 9:55:00 PM No comments: