5 Movies on an Island

In honor of National Classic Movie Day, Rick from Classic Film and TV Cafe is hosting the 5 Movies on an Island Blogathon. 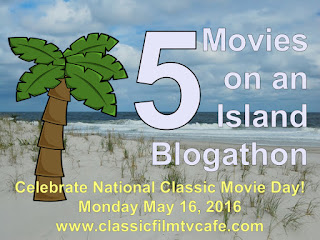 
Pick five classic films you would want to have with you if stranded on a deserted island.


Here is what I came up with:

*a weeper because when one is stranded from friends and family, a good cry is in order

*a comedy because when life is at its bleakest, you need a good laugh

*a holiday movie to celebrate the yuletide season 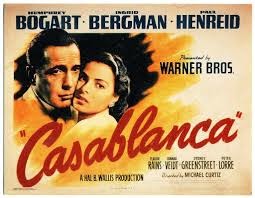 I'm in love with this movie. I know every line, every snippet of melody in the background,every costume's design. I cannot imagine relegating Casablanca to a memory replayed in my mind. This would have to be in my stranded suitcase. Maybe it is not a weeper in the true sense of the word, but this all time fave has me in tears each time Bogart gives his noble speech and Bergman says, "God bless you."

After I've had a good cry, I'm going to want to laugh. As I am easily amused, this was a toughie. I considered Bringing Up Baby (1938) with beloved actors Katharine Hepburn and Cary Grant. I also thought about taking along Sunday in New York (1963) or Doris Day and Rock Hudson's first comedy together, Pillow Talk (1959). In the end, Jane Russell and Marilyn Monroe's musical comedy won out. 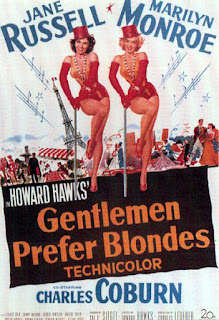 I have yet to tire of the witty song lyrics ("For a kid from a small street / I did very well on Wall Street / Though I never owned a share of stock"), Monroe's over-the-top portrayal of gold digger Lorelei Lee ("She really needs somebody like I to educate her."), and Russell's funny quips ("The chaperone's job is to see that nobody else has any fun. Nobody chaperones the chaperone."). Gentlemen Prefer Blondes shows female friendship in a positive light and turns the table on men's perception of women at the time (Lorelei to Esmond's father: "I can be smart when it's important." In other words, the joke is on you). Beautiful costumes throughout the film and a handsome Olympic team during Russell's "Anyone Here for Love?" are bonuses to choosing this flick. 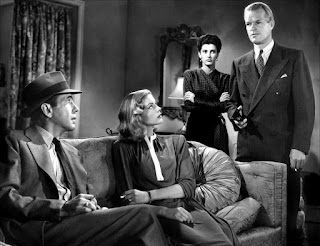 No matter how many times I watch The Big Sleep, the plot remains slightly out of my grasp, yet I feel as though I am on the brink of understanding it after each viewing. I could come up with countless interpretations of the film and never get bored. Definite deserted island viewing.

Just because you are stranded, doesn't mean you have to give up Christmas. This is the one yuletide flick I make time to view no matter how crazy busy I get during the holiday season. The songs and dances, the costumes and sets, the romance, comedy, and loyalty of friends make it ideal holiday viewing. I can't imagine sacrificing it or my fave day of the year. 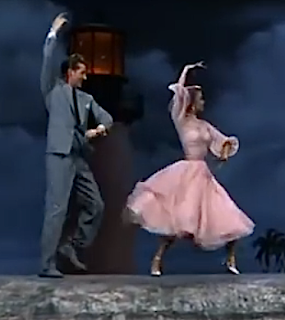 A sentimental favorite:
"The Best Things Happen While You're Dancing"

Like choosing between my children, the musical category was the most difficult movie choice to make. I finally decided that my man Fred Astaire would need to come with me to my stranded island. With over thirty films to his credit, the selection wasn't exactly narrowed. Should I go with my fave Astaire and Rogers movie (Follow the Fleet, 1936) or You Were Never Lovelier (1942) where Astaire swings with Hayworth in "The Shorty George"? And what about Easter Parade (1948) which features Judy Garland's voice in addition to Ann Miller's taps?

The final decision was made based on the fact that every so often I watch the following number on You Tube or Vimeo, proof I could never permanently say good-bye to the film: 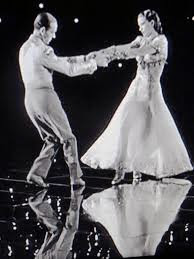 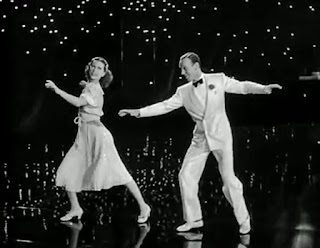 "Begin the Beguine" from Broadway Melody of 1940
Click here to view.

In my opinion, Astaire and Powell's "Begin the Beguine" is the best tap number ever captured on film. The dance literally gives me goose pimples--it is just that good! I love how Powell keeps Astaire on his toes. She is his equal, challenging him with her steps. If you watch carefully, there is even a part where he watches her feet--as though he is the one trying to keep up with her. Go girl power!

A bonus - George Murphy also hoofs throughout the film: 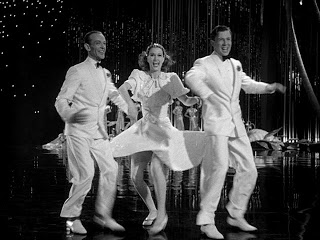 Thank you for reading my five film picks. Be sure to visit Classic Film and TV Cafe and check out which movies other classic film bloggers would take if stranded on an island.