This entry is part of the Gotta Dance! Blogathon hosted by Classic Reel Girl on May 25th. Click here to view more fabulous entries celebrating dance in film.


On Wednesday, May 25th, we celebrate National Tap Dance Day and the birth of the King of Tap himself, Bill "Bojangles" Robinson. 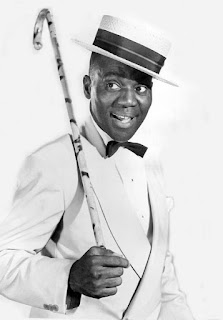 Today, Robinson is best remembered for the four films he made with Shirley Temple. He has been both praised and criticized for his part in these movies. Praised for breaking race barriers when he and Temple became the first interracial dancing duo to grace the silver screen. Criticized for taking "Uncle Tom" roles where he portrayed servant, slave, butler, and overall protector of a little white girl. 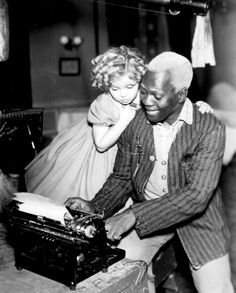 On the set of The Littlest Rebel (1935)
Image Source

In interviews with Larry King and Leonard Maltin, Shirley Temple Black fondly remembered Robinson, stating they enjoyed working together and became lifelong friends. She explained that Robinson treated her as an equal and was an excellent teacher. He taught her how to dance by listening rather than watching her feet.

Bill Robinson and Shirley Temple tap in The Little Colonel (1935)

Robinson's and Temple's bubbly personalities endeared them to audiences just as much as their mastery of complex steps (granted the steps lacked the complexity Robinson could showcase if solo). In her interview with Larry King, Temple Black shared that she was not pretending to dance with glee, she truly enjoyed dancing with Robinson.

Joy likewise spilled from Robinson. Whether dancing with Temple in an "Uncle Tom" role or starring in a "race film" (Harlem is Heaven, 1932), Robinson bursts with happiness at each tap. Listen carefully (2:49 and 3:25) and you will hear Robinson's exclaims of delight in this clip from "King for a Day," a 1934 black film short:


Long before partnering with little Shirley Temple, Robinson established himself in vaudeville, graduating to the more prestigious Keith-Albee and Orpheum circuits, and eventually finding his way onto Broadway. The world took notice of his stair dance, a signature routine in which he gradually ascended a set of stairs, torso erect, tapping in a series of complex steps which created its own rhythm, pushing the music accompaniment aside. Once on top, Robinson descended the next set of stairs in the same fashion. A clip from Harlem is Heaven (1932) captures Robinson's famous stair dance. Note how Robinson's steps build upon each other, intensifying over the course of the song, becoming faster with each ascent and descent until he finally sprints in a cakewalk off the stage. He knows how to work an audience--he leaves us wanting more.

Dozens of dancers attempted to imitate Robinson, and some found success to a degree. However, there was only one "Bojangles." He made the routine look easy, but as Megan Pugh observes in America Dancing: From the Cakewalk to the Moonwalk, "Even practiced tappers were unable to distinguish between his left foot and his right: the two were perfectly balanced." In her interview with King, Temple Black also recalled the difficult nature of Robinson's speedy nerve tapping.


What is nerve tapping? See below.

Most readers will be familiar with this example of nerve tapping:
Vera-Ellen in "Choreography" White Christmas (1954)


In addition to his imitators, Robinson won many admirers as well. One of them was a young Eleanor Powell, who had the fortune of performing on the same bill as Robinson in New York. The two became friends and earned money dancing together at the private parties of upper crust society. Unfortunately this would not translate to the silver screen. While studios were willing to push boundaries and allow Shirley Temple to dance with a black man fifty years her senior, they would absolutely not allow Robinson to dance with Powell--any suggestion of romantic involvement between races considered socially taboo.

Side note: Robinson filmed an apache number with Temple's white tap teacher, Geneva Sawyer, for Cafe Metropole (1937). To make the routine more socially acceptable, Sawyer performed in blackface. The dance was ultimately left on the cutting room floor, the interracial dancing deemed too scandalous for the American public. [Further drama ensued when the public wondered why Robinson did not choose to perform with Jeni LeGon, an African-American dancer with whom he successfully danced in RKO's 1935 Hooray for Love. Some argue that Robinson's omission ruined LeGon's career.]

The closest Powell and Robinson would get to dancing together in film was an homage to him in Honolulu (1939) where she becomes her idol--complete with blackface. While jarring for modern viewers, the number is Powell's way to subvert social mores of the day and publicly pay tribute to the performer she so admired. In the film, she performs Robinson's stair dance. In addition to Temple, Powell was the only other dancer to whom Robinson taught his iconic stair dance--further proof of their special friendship. 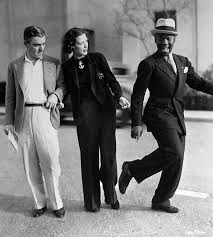 Another fan of Robinson's work was the equally great Fred Astaire. In Steps in Time, Astaire commented, "The great Bill interested me, not only for his incomparable dancing but for his good nature and likable personality--in addition to his ability as a pool player." Robinson was impressed with Astaire's footwork as well. Astaire noted that Robinson told him, "Boy, you can dance!" when they first met.

With choreographer Hermes Pan and composer Hal Borne, Astaire created a tribute to Robinson and other African-American dancers in Swing Time's "Bojangles of Harlem" (1936). The lyrics were an ode to Robinson while the dancing was more aligned with John "Bubbles" Sublett's style (much more movement above the waist, swinging of arms). Like Powell in Honolulu, Astaire performs "Bojangles" in blackface--albeit very light blackface--with upmost respect for the men he was honoring. Both Astaire and Pan were greatly influenced by black dancers. This was their way to honor them.

Because of societal attitudes during his life time, Robinson was deprived of opportunities afforded his white peers. The society that limited his image on film continues to reach into our time as Robinson remains less recognizable compared to Powell and Astaire. Fortunately their blackface tribute dances stir conversation (check out #TCMParty next time one of the films air) and serve as a reminder of who King of Tap was.

Robinson changed the face of tap dancing and influenced countless numbers of dancers. If there was no Robinson, then there would be no Powell or Astaire or anyone who was in turn inspired by them. No Gower Champion. No Michael Jackson. Society may have been able to limit Robinson's image--hopefully today's post helps rectify this, but they can never erase his far reaching influence. Thanks to Bill "Bojangles" Robinson, all the dance world is copasetic! 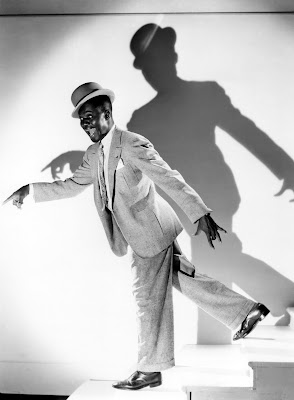