Happy Birthday to the Great Kate!

Senior year during high school, my student government teacher took us outside and sat us in a circle. He asked the following:

If you could dine with someone famous--living or dead, past or present--who would you select? Why?


The answers ranged from the conventional (George Washington, Abraham Lincoln, Martin Luther King Jr.) to the contemporary (Coolio, Will Smith, various Spice Girls). I went with neither. Instead I chose...


...Katharine Hepburn because
"she was a strong woman in early Hollywood."


While many of my classmates envisioned the Spice Girls when they heard the term "girl power," I thought of Katharine Hepburn. Hepburn was strong, independent, a force with which to be reckoned. In high school, I had not read her biographies to confirm this, yet I intuitively knew she possessed these qualities. The evidence was in the way she entered a room, shoulders back, head held high. It was in how she delivered a line, unapologetic, completely committed to her character. It was in her style, the pants she wore long before they were fashionable and the roles she chose, women who stood up for themselves and for what they believed in. Whether struggling to capture a loose leopard (Bringing Up Baby), climb the social ladder (Alice Adams), accept human frailty (The Philadelphia Story), win a court case against her hubby (Adam's Rib), or place her favored son on the throne (The Lion in the Winter), Hepburn's characters had a feminist streak, and I dug that. They were fiercely independent and triumphed in a man's world.

So here's to you, Kate! Thank you for teaching me and countless others how to be a strong woman. 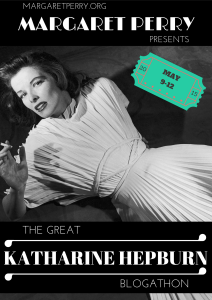 By the way: I have since read several Hepburn biographies, including one that is covered in the blogathon, and Katharine is every bit--if not more--the women she played on film.
Posted by Bonnie at 8:05:00 PM