This is a continuation of my adventure at the 2015 TCM Film Festival. Read about the first day here.


After our late night adventure, I was torn between sleep and Why Be Good? (1929) the following morning. Raquel's (Out of the Past Blog) review of the silent greatly peaked my curiosity in the film and its flapper star, Colleen Moore. The TCM showing was the perfect excuse to finally see it. On the other hand, my stomach had not settled since the drive down, so a good breakfast might do it well. Plus, I wasn't sure how mom would feel about seeing a silent. For that matter, I wasn't even sure how I felt about sitting through a full length silent, no multitasking, full attention--I had never done it. Was I ready for this big step? And my stomach.... I rolled over and went back to sleep. Coward. Oh well, just as long as we made it to: 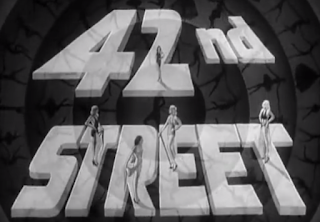 From the get go, 42nd Street (1933) was my one non-negotiable, absolute must see movie of the festival. The thought of seeing those elaborate Busby Berkeley numbers on the big screen thrilled me. Not to mention Ruby Keeler dancing and Dick Powell singing. This is where it all started. The birth of the big budget musical.


Unfortunately, the gods of comedy thought it would be funny to send me a screwball kind of weekend fitting of the films I so often enjoy. After waking up later than intended, I skipped breakfast because there was no way in heck I was going to miss 42nd Street. A few bites of fruit should do the trick, right? Mom and I rushed downstairs to wait for our transportation: Uber. The bustling Friday night life had been replaced by a serene silence--brrrrrumm--by a serene silen--brrrrumm--by the buzzing of jackhammers? Yes, jackhammers, orange cones, and men in hard hats. We were staying at hotel in downtown LA, and what better time to do construction than on a weekend when the week's workers were at home? Mom's cellphone rang. In all his wisdom of LA's great grid, our Uber driver could not find us in the maze of one-way streets and construction zones. Oh, and by the way we were carpooling, so ours would not be his first stop. Forehead to palm of hand.


Mom and I walked to the non-construction side of the hotel. As we peered at each passing car's license plate in search of our ride, the thought crossed my mind that we must look like the prior evening's women of the night minus the spandex. I had to chuckle. The Uber eventually arrived and dropped us in front of Grauman's Theatre. We hustled up the stairs and found our spot at the back of the line. Before the TCM lady would give us our place-holder numbers, she asked to see our passes. Sure, no problem, we thought. She took a quick gander at them and informed us that we were in the wrong line. Huh?


I am ashamed to admit it, especially since much of my job is to read and relate correct information, but I misunderstood the perimeters of our passes. I thought all of the Chinese Grauman screens were included under the TCL Chinese Grauman Theatre IMAX umbrella. (This has been the case with the Fathom screenings I have attended in my home town.) 42nd Street was in the Chinese Multiplex House. Oops. I guess it was just as well that we slept in and missed Why Be Good? We were directed to the standby line where we would have to pay $20 to get in. If there were seats available. Bummer. Not willing to let this get me down in the happiest place on earth for classic movie fans, I searched for the sunny side of the street. According to the festival programming guide, there were 477 seats in House #1, so we should get in. And at least this would narrow our film choices significantly; we were only paying for absolute must-sees. No heart-wrenching decisions between two beloved films for us.

Our line began to move. We were going to get in! "Shuffle Off to Buffalo" rose to my lips but was cut off by the words "$20 cash". Cash? What is this thing called "cash"? Mom scrambled through her purse and after a bit of digging, she fished out two twenty-dollar bills. (Thank you, Laura for your 'public service' tweet about the Egyptian Theatre's cash only snack bar. I relayed the message to my mom, which is why she had cash on her.)


Even though we were one of the last to enter the theatre, we found phenomenal seats. Christine Ebersole, who played Dorothy Brock in the Broadway version of the movie, introduced the film. She pointed out the play she performed in was an anomaly--typically movies pattern themselves after popular Broadway shows, not the other way around. The film was as fabulous as expected and worth the obstacles to get there. The dialogue was snappy and sexy. (For once, I was able to hear all of it without the interruption of children squealing through the room during the day or me playing remote volleyball* while the children sleep at night.) The pre-codeness of the lines had us in stitches:

Andy - Not Anytime Annie? Say, who could forget her? She only said no once, and then she didn't hear the question.

*remote volleyball - the act of going back and forth with the remote's volume: down when music is loud, then up when dialogue comes on, and down again when the music returns; ultimately results in missed pieces of dialogue

A lot of the fun came by way of the secondary actors, who made the audience laugh without saying a word. Witness Una Merkel's and George E. Stone's facial expressions (much clearer on the big screen than my YouTube screenshots), which tell the story behind their relationship. It's not love keeping them together:

She wants to make sure he sees her among the gals auditioning.
He does. Can you tell how thrilled he is?

She plays it off in front of the gals, but Una's facial expression shows what is really going on.
She's using him for a job, and he's using her for some nooky.

And then there was Busby Berkeley's genius: 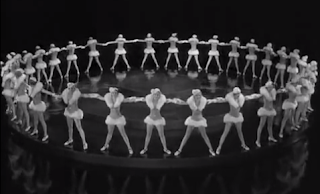 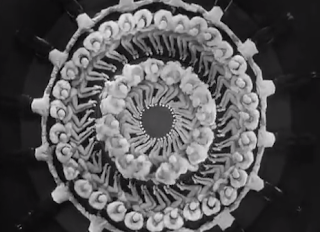 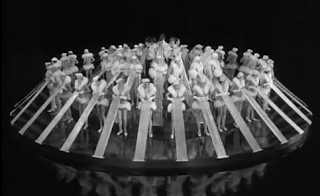 With a tender tummy and movie choices eliminated, it was as good a time as any to grab some chow. We headed over to Mel's Drive-In. The diner is modeled after the one featured in American Graffiti (1973). In fact, the picture at our booth featured Candy Clark, Charles Martin Smith, and Ron Howard from the film: 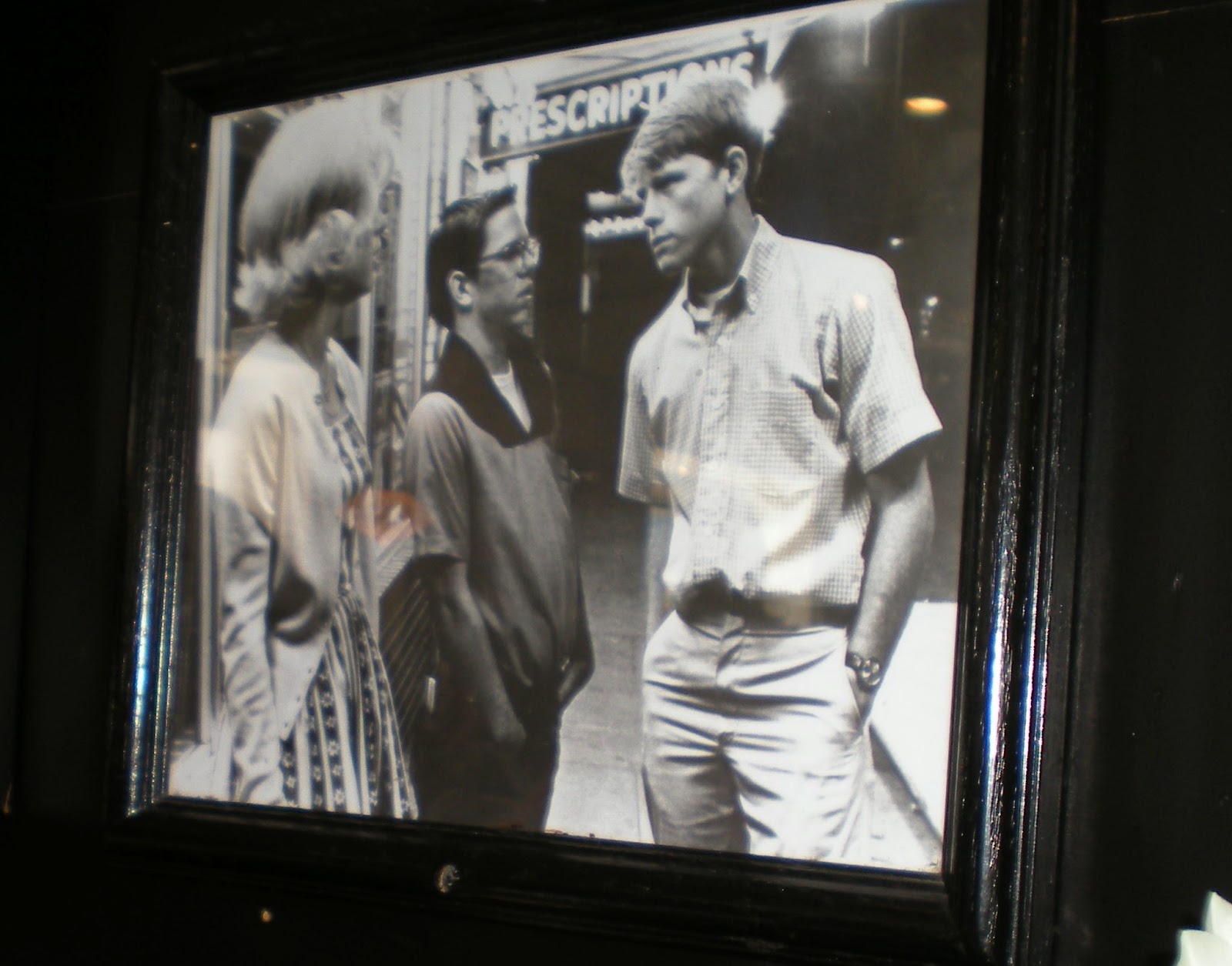 I soooo wanted a burger, but my stomach was having none of that. Instead I opted for the tomato soup and grill cheese special. Not bad for a second option. The food was delicious, the waitress hilarious, and the atmosphere had a vintage vibe. I would definitely go back.

Outside I was not feeling the craziness of Hollywood Boulevard. I needed a quiet place to sit and just be. And what better place than the watering hole of classic Hollywood? 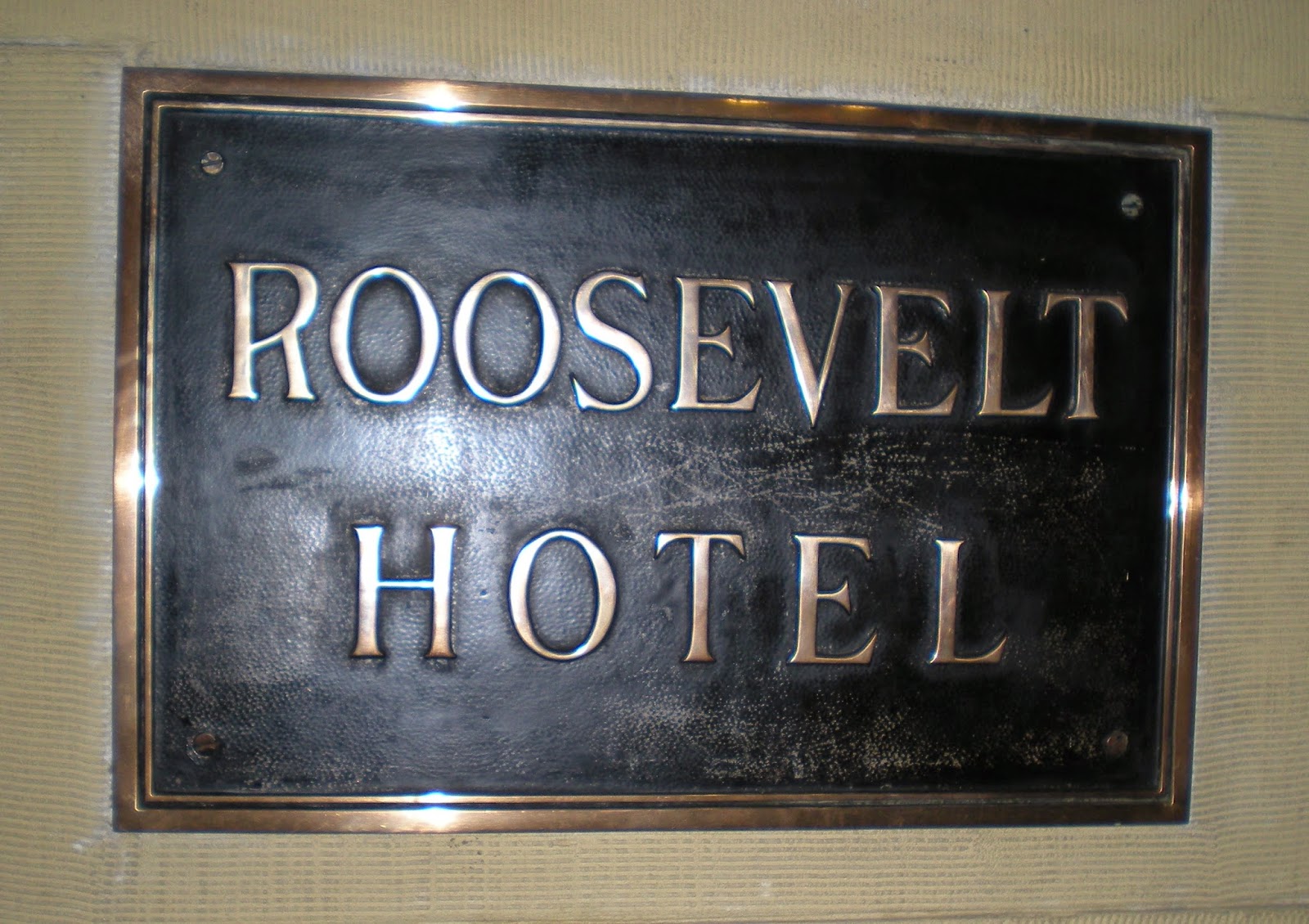 (Okay, maybe not their watering hole--that would be
the Brown Derby or Chasen's, but just go with me here...)


At last, our timing was perfect. The book signing I was curious about was in progress. I got to peruse the book (Mike Kaplan's Gotta Dance: The Art of the Dance Movie Poster), pick up some souvenirs, then sink into a comfy chair and relax. I'm pretty sure I spotted some bloggers, but felt too socially awkward to introduce myself. Besides, I'm relatively new to the blogging world and didn't want to interrupt their conversations.

After a while, my twitter feed was abuzz with people who were already lining up for The Apartment (1960)--not surprising considering Shirley MacLaine would be the guest of honor. Off we went to the grand Grauman's Chinese Theatre. 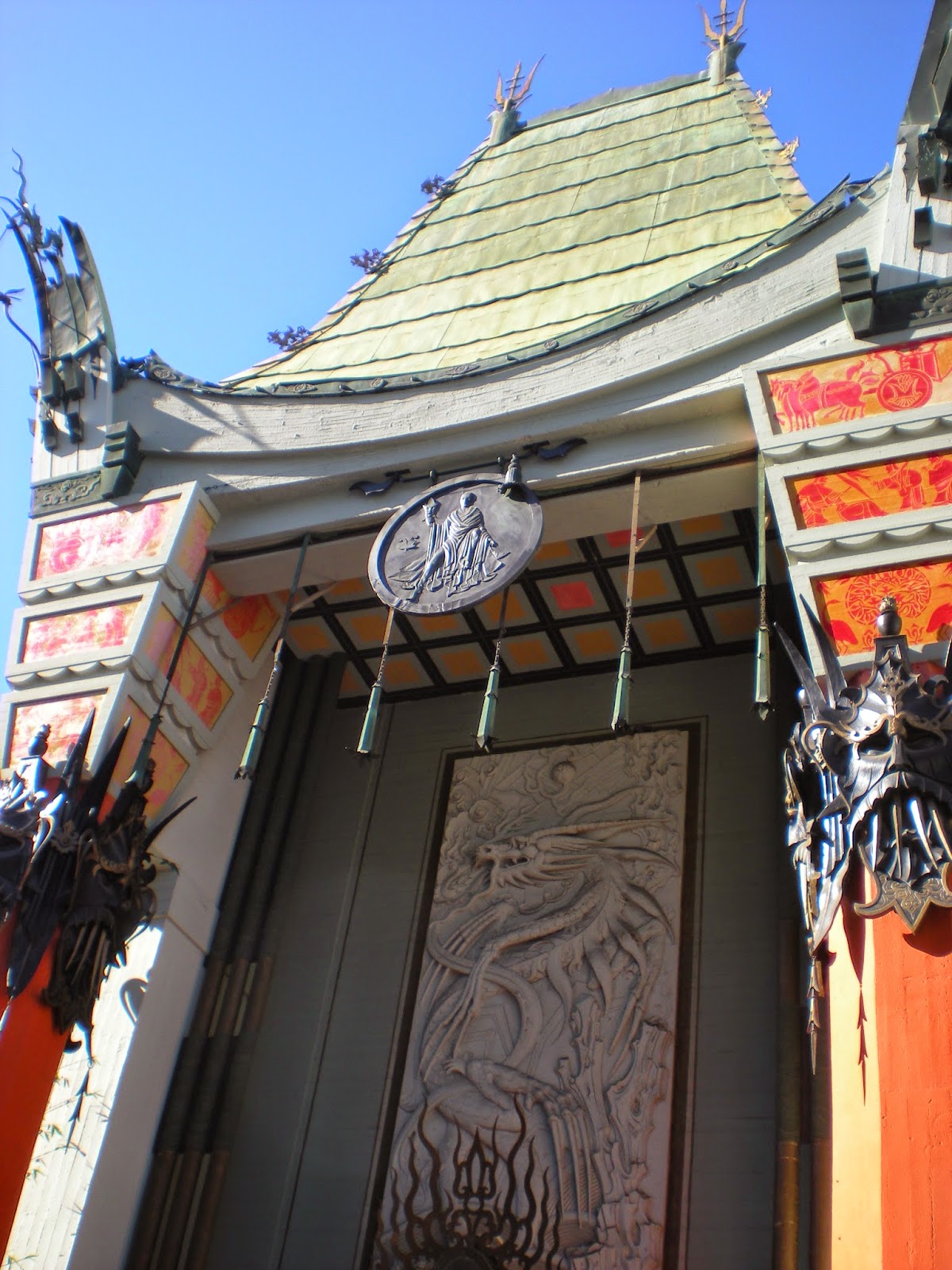 We snagged the last spots before the front line was roped off. The people who followed us would have to wait upstairs. I was an unashamed tourist, taking pictures of the theatre's exterior and the footprints below us. Mom and I visited with Lynn from Classic Movie Favorites who, as luck would have it, was standing next to us in line. Then the moment came. We were in the presence of a great film star. Shirley MacLaine. Wow. She was frank, funny, and did she say she slept with Jack Lemmon? Anyone else catch that? I digress. It was interesting to hear how the moments that unfold so naturally on the screen came to be. MacLaine shared how Wilder motivated her to tears by degrading her acting skills, and how in other parts, she pulled on memories of a bad relationship to help her emote her character's pain. This was the first time I saw The Apartment in its entirety. Lemmon, as always, was endearing despite his character's flaws. MacLaine's pain felt genuine. And Fred MacMurray? Well, he came across as the jerk he was supposed to be. I can see why Matthew Weiner required his Mad Men actors to watch the Manhattan apartment-motel movie in preparation for bringing their characters to life (Vanity Fair).


After the movie, we took some pictures of the costumes in the theatre's lobby. Then we decided to call it a night so we could wake up fresh for Calamity Jane the next morning. As we waited for our Uber ride--who for some reason could not find us although we were in front of the historic Roosevelt Hotel--I ran into Aurora from Once Upon a Screen. It was a real treat chatting with her. I love her idea of wearing twitter handle pins so we can easily recognize each other next year. She also gave me the lowdown on nearby hotels, which was much appreciated considering all of mom's and my Ubering troubles. We eventually made it back to the hotel safe and sound.

Come back soon for the conclusion of our TCM Film Festival adventure.