Brunettes, Blondes, Disability, & Questions Out of the Past 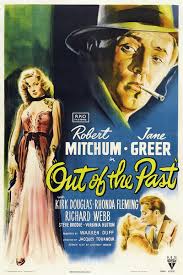 I have long heard this film's praises which is why I added it to my 10 movies to see in 2015 list. Out of the Past (1947) turned out to be quite a treat. It almost seems morbid to say that with all the deaths in the movie, but you've got to appreciate a film that keeps you on your toes.

I purposely avoided movie reviews and synopses so I could view the film with fresh eyes. I knew it was a noir and was fairly confident the brunette was going to double-cross the men. (I've watched The Maltese Falcon. I know to watch out for those sneaky brunettes...) Sure enough, the brunette is beautiful, but deadly. Her wardrobe is stunning and her role the juicier of the two female parts. 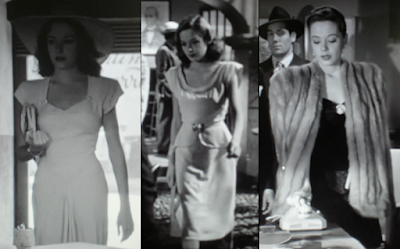 The Brunette/Femme Fatale, Kathie Moffat (Jane Greer), in three of her gorgeous outfits

In contrast, the blonde, who plays little more than an audience surrogate (basic purpose: listen to the Mitchum character's past), is plain, but virtuous. She is the one we are to emulate. Go ahead and fall for the mysterious stranger, just don't marry him. 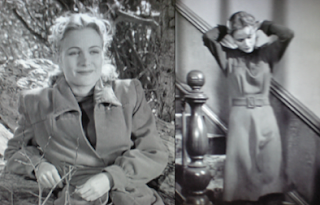 The stranger in question is Jeff Bailey (Robert Mitchum), who fights the good fight, but in the end makes the noble sacrifice expected of characters who must atone for sins of a past life. In this case, Jeff gives up the [blonde] woman he loves. And the catalyst for the events? Whit Sterling, a wealthy gambler played by Kirk Douglas, making the leading three a cleft-chinned bunch:

In the mix is a character referred to as "The Kid" (Dickie Moore). "The Kid" is a minor role, reminiscent of Dick Tracy's loyal orphan pal of the same name (Dick Tracy, 1990). He doesn't get much screen time, but his inclusion is significant because he gives a positive representation of a person with a disability during a time when it was not common (arguably, still isn't). He is deaf without the stereotypical labeling or depiction. He is not a tragic figure to be pitied like Tiny Tim or fixed like Emily Blair in And Now Tomorrow (1944). Rather, "The Kid" is portrayed as capable and treated with respect by the other characters--even by the antagonists. At the same time, it is unlikely the writer, Daniel Mainwaring*, casually included a character with a disability.  Since "The Kid" is the first person the audience meets in connection to Jeff's new life, his young friend might be meant to tip us off that Jeff is a likeable guy despite his checkered past. In other words, "The Kid" may exemplify what Mariam Nathan Lerner describes as a "representation of deafness [...] to provide a window into audience understanding and appreciation of the protagonist."

*Mainwaring used the pseudonym Geoffrey Holmes when he wrote Build My Gallows High, the novel on which Out of the Past is based.

The lines--writing and delivery of--are solid. I love the insight into Jeff's character from this exchange -

Taxi Driver: Buddy, you look like you're in trouble.

Mitchum's character doesn't wear his heart on his sleeve. Another favorite -

Secretary: For a man who appears to be clever, you can certainly act like an idiot.

Jeff: That's one way to be clever. (Slight pause) To look like an idiot.

I've heard similar responses from Marilyn Monroe's and Ginger Roger's characters. It's interesting to hear it from a man.

The twists compel the viewer to pay attention or lose track of who is crossing whom. After seeing it once, I feel there are parts that I missed. For example, when Ann's father reads the paper, he says that Jeff is wanted for two murders. I know about Eels. Who is the other victim? And what about the Kathie and Joe angle? Was she playing him like the other men? Or was he focused on not disappointing Whit or saving his neck? Is Whit and Joe's relationship more than platonic (Joe worried about disappointing Whit, Whit's extreme distress and anger at Joe's death)? Finally, Kathie had a remarkably accurate shot, why/how did she miss Whit at the beginning of the story--was there more going on?

These questions aside, the resolution was satisfying. I loved the irony of Kathie's last outfit. As she fully reveals how evil she is, her outfit gives her the appearance of a nun. 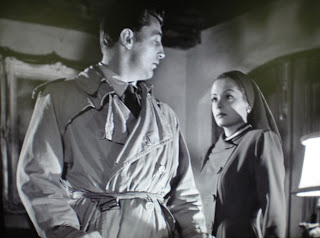 When Jeff tries to reason with her (like you can with this dame) that if they run off to Mexico, the police will find them, she responds:


I don't care. Just so they find us together.

Dang, I thought, She's ready to go out Bonnie-and-Clyde-style! I didn't know how close I had hit it. 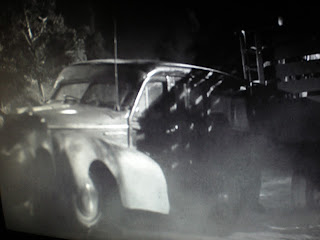 Email ThisBlogThis!Share to TwitterShare to FacebookShare to Pinterest
Labels: 10 for 2015, 1940s, Dickie Moore, Disability, Film Noir, Jane Greer, Kirk Douglas, Out of the Past, Robert Mitchum