At the beginning of each year, Laura at Laura's Miscellaneous Musings puts together a list of ten films she plans to see during the new year. I thought this was a grand idea--what a wonderful way to ensure you are exposed to some new movies while checking off others that you have long been wanting to see!

I searched my new DVD collection sets (my Christmas gifts were Classic Hollywood themed--yay!), the books I am reading/plan to read, AFI lists, and other classic film fans' opinions to help compile my list. After going back and forth a few times, here is the final list I resolve to see by the end of 2015:

1) American Madness (1932) - I received a Frank Capra set a few years ago, and this is the only movie I have yet to see. I typically enjoy "Capra-corn." Bonus: The movie is pre-code. Seems like a winning combo. 2) My Man Godfrey (1936) - I saw the very beginning of this film but got busy and was not able to finish it before it was removed from TCM On Demand. It looked promising. Plus it stars Carole Lombard and William Powell, two favorites.

The next four are inspired by the books I am either currently reading or plan to read before the year is up.

3) The Impatient Years (1944) - Jeanine Basinger wrote about this movie in I Do and I Don't: A History of Marriage in the Movies. It stars Jean Arthur and looks at what happens when a GI returns home to a wife he hardly knows. In a way, the film picks up where many early WWII movies (such as The More the Merrier, also starring Arthur) leave off. Intriguing. I just hope I can find a copy of this on DVD! Any leads would be welcome. 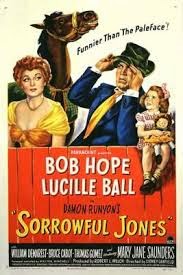 5) Presenting Lily Mars (1943) - I have been wanting to see this Judy Garland pic for a long time. Since I plan on reading Charles Walters' biography this summer (he choreographed the finale), I figure there is no time like the present. 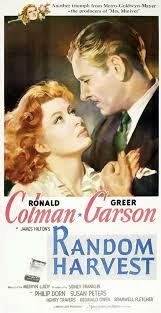 9) Random Harvest (1942) - I have read wonderful write-ups about this film on several blogs (Backlots and Cary Grant Won't Eat You). I don't know how this one got past me. (Also number 36 on top 100 greatest love stories.)

10) Out of the Past (1947) - In addition to being the namesake of one of the blogs I follow, the last time this movie was on TCM my Twitter Feed was afire with positive tweets from fans of this film.  It would also add another film noir under my belt. My biggest hurtle: Kirk Douglas. After reading a Natalie Wood biography, I can barely stomach watching him...


Well, there it is. Wish me luck! I would love to hear any comments you may have about the films.
Posted by Bonnie at 12:59:00 AM

Email ThisBlogThis!Share to TwitterShare to FacebookShare to Pinterest
Labels: 10 for 2015