***This is an exception to my no play-by-play rule. Warning: spoilers abound.***

Posted prominently on the fabric bulletin board above my desk is the phrase: "Never be afraid to try something new." It serves as a reminder to always seek adventure and new opportunities. In terms of marriage, it evokes images of Nick and Nora Charles as they go wherever the leads take them with cocktails in hand and a quick quip to lighten any misstep. In their eyes, the risk of adventure is worth the humor and affection it brings. And along the way, they catch a crook or two. 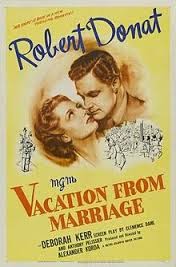 The antithesis of Nick and Nora would be Cathy (Deborah Kerr) and Robert Wilson (Robert Donat) in Vacation from Marriage (1945; known as Perfect Strangers in Britain). The couple's life is an unending dance of drudgery:

Robert - Comes out of bedroom. Changes date on calendar. Adjusts the time on the mantle clock.

At breakfast table - Lifelessly stare at each other. No word spoken.

Robert's exit to the office foretells of his departure to the war. Both are without ceremony. He taps the face of the wall clock. Like Pavlov's bell, the taps signal Cathy to hang an umbrella on Robert's elbow. There is no kiss goodbye, nor is there one when he leaves for the navy. Cathy's cold gets in the way each time--although Robert does not look terribly excited about the prospect anyways.

The release from marriage allows each to go through a significant transformation. He toughens up. She gains confidence and loses her perpetual cold. Years are shed from their visages. Through a series of cleverly linked sequences, the screenwriters (Clemence Dane and Anthony Pelissier) show Cathy's and Robert's metamorphoses. In one scene, Cathy overcomes fear to deliver an important message. In the next, Robert describes his wife as simple, quiet, and dependable and then he in turn faces a traumatic event when his ship is torpedoed. This is followed by a scene in which Cathy describes Robert in a similar manner (simple, kind, dependable), adding his distaste for dancing. Soon after Robert is shown dancing--and enjoying it.

The pacing of the scenes are spot on. As the couple's reunion approaches, their mutual dread is felt not only by their words, which are almost identical, but also by the quick jumps between each character's perspective. In so doing, the writers effectively build suspense as the audience wonders what will occur once the couple finally meets again. When they finally meet, the tension grows--they cannot see each other in the dark streets of London in blackout. In the lighted bar, this is what they at last see:


Some might say Cathy and Robert have become new people as a result of the war. This may be true to a certain extent. He dances now, and she drinks pink gin. However, their transformation is more a rediscovery of their premarital identities. For example, Cathy, who no longer wore lipstick or smoked because Robert did not like it, begins to do both again--with a little encouragement from her bunk buddy (Glynis Johns)--upon entry to the Wrens (WRNS - Women's Royal Naval Service). Further evidence that the two have returned to their old selves by the end of the film is Cathy's comment after encountering the "new" Robert: "Meeting him like that reminded me of when we used to meet in the tea shop." Somewhere along the line, Cathy and Robert lost their individual identities. Once they recapture the essence of whom they once were, their marriage has a chance.

There seems to be several messages at play here. One aligned with the time period is that war has changed people for the better; i.e. we're all stronger because of it. The film also seems to suggest that women should not be confined to the house; it's not healthy. As Glynis Johns' character suggests, Cathy's cold can be cured with "Proper diet. Fresh air." This stance is backtracked, though, towards the end of the film when Cathy insists that the woman's place is in the home. It is as though the writers threw in a little PSA--perhaps trying to convince the girls to go back home after the war? (Personally, I am a little worried about what might happen if Cathy is confined to the flat again...)

The message that comes across and remains most relevant to twenty-first century viewers, though, is the importance of not losing one's identity and not becoming complacent in a relationship. Change it up every once in awhile--go to a different place for vacation, partake in your partner's favorite activity (dancing!), or try a new drink. And if all else fails, take some tips from Nick and Nora Charles. 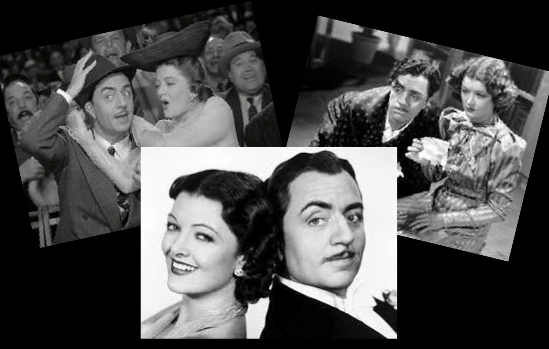 For more on how Nick and Nora kept the spark alive in their marriage,
check out Thoughts on The Thin Man (now available via Amazon).
Posted by Bonnie at 1:28:00 AM