As we ring in the new year, let's count down Classic Reel Girl's top 5 Film Finds of 2015. 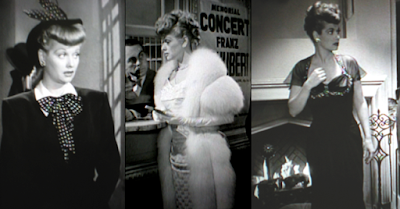 Her presence elevates every film in which she appears (at least in all those that I have viewed thus far). Be forewarned that the plot begins to drag, but it is worth the watch to see Ball in a dramatic, film noir-ish role. Several cherries on top: Boris Karloff makes an appearance, Ball dons chic costumes, and if you are interested in literary criticism, the plot lends itself to a gay reading.

4) Across the Pacific (1942) - Why I plan to revisit Pacific: actors' chemistry and sexy dialogue. 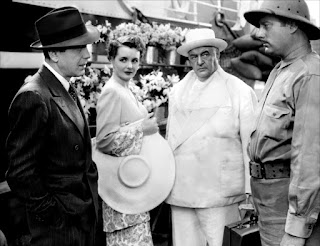 A reprint from my September Viewing -


This film reunites Humphrey Bogart, Mary Astor, and Sydney Greenstreet who found great success together in 1941's The Maltese Falcon. Their chemistry works again, and it is enjoyable to watch the three actors feed of each other so well. Innuendos fly. (In fact, I was surprised some got past the censors.) The ending feels overdone, almost as though the writing became self-conscious of itself and world events. Research after viewing the film confirmed this. According to Mary Astor's autobiography, the plot, which detailed a Japanese invasion of Hawaii, was changed when Pearl Harbor was actually bombed (TCMDb). To be honest, I'd still watch the film again if only to catch the juicy lines of dialogue.
*
*


3) The Affairs of Dobie Gillis (1953) - In one word: smiles. If you want a lighthearted film that will make you forget the day's stresses and coax you into laughter, this is the movie for you. In addition to many comedic moments, the film contains great dance and song numbers. Future choreographer Bob Fosse dances with Debbie Reynolds and Barbara Ruick (Carrie of Carousel fame) who also sing. Here is a sampling:


2) Underground (1941) - Reason to watch: lesser known film dealing with WWII conflict in real time. I viewed Underground in the midst of reading Sibert Honor author Deborah Hopkinson's Courage & Defiance: Stories of Spies, Saboteurs, and Survivors in World War II Denmark. Other than the torture scene which is too generous to the Nazis, the movie is remarkably on target. A reprint from my November Viewing - 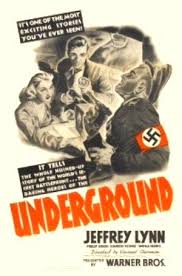 At the time of its release in June 1941, the U.S. had not entered World War II. With Underground, Warner Brothers attempts to cure its viewers of their feelings of pacifism. Resistance leader Eric Franken's (Philip Dorn) illegal broadcasts are as much for the Americans' benefit as it is for his fictional audience. "45,000 human beings," he warns, "wiped out in a city which was defenseless and which had no military objectives."


Meanwhile his brother Kurt (Jeffrey Lynn), who happens to be fervent Nazi soldier, embarks on a series of events that will end in his discovering the Third Reich's hypocrisy and brutality. His journey brought to mind Martin Niemoller's poem, "First They Came for the Socialists." In this case, there are no Socialists, Labor Unionists, or Jews. However, there is a sense of groups being taken away one by one: the neighbors, Kurt's family, and the Nazi soldier himself when he is suspected of espionage. This dangerous people will turn on anyone, the movie says, even themselves. No one is safe.

The message was lost on the public if one is to go by New York Times critic T.S.'s review of the film. The critic deemed the plot "neither distinguished nor original" and criticized "the characterization of the Gestapo agent [who is] too coldly inhuman to be credible." If only he knew! To his credit, T.S. recognizes "the savagery of the Nazi state" in the last line of the review. Nonetheless, there is an obvious disconnect between the inhumane actions of individuals and how they enable the savagery of the Nazi machine.
*
*
*
* 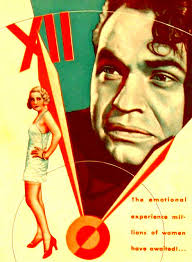 1) Two Seconds (1932) - Reasons this film is a must see: Edward G. Robinson's acting, Vivienne Osborne's character, use of sound as plot device.

I discovered this film while researching my entry into the Classic Movie History Project Blogathon: Pre-code Portrayals of Taxi Dancers. Before Two Seconds, my familiarity with Robinson's work was limited to movies in which he acted alongside other big stars (Barbara Stanwyck and Fred MacMurray in Double Indemnity (1944); Orson Welles and Loretta Young in The Stranger (1946); Humphrey Bogart, Lauren Bacall, and Lionel Barrymore in Key Largo (1948); Charlton Heston, Yul Brynner, and Anne Baxter in The Ten Commandments (1956); Frank Sinatra in A Hole in the Head (1959)). As the sole bill above the title, Robinson's acting commands full focus in Two Seconds. Over the course of an hour, Robinson transforms from a content construction worker to an unemployed, depressed man, and finally into a raving lunatic. Check out this monologue:

Although Vivienne Osborne's Shirley Day causes the demise of Robinson's John Allen, I cannot help being keen on her. There is no denying she is a gold digger. However, when her gold mine goes bust, she does not abandon ship. She picks herself up, gets to work, and takes care of her depressed husband in the process. She is wrongly faulted for her tenacity, for taking action instead of rotting beside her husband in misery. Allen's inability to accept his wife's breadwinner status is just as much to blame (if not more) as Shirley for his self-destruction. I would love to see Two Seconds remade from Shirley's perspective.

Another reason to view Two Seconds is the way director Mervyn Le Roy uses sound to periodically remind the audience that a man is being electrocuted. As scenes transition, sounds mimic the chair's surging electricity: the buzzing of a drill, pounding of a drum, fizzing of a soda machine, squealing of a radio, humming of a fan. Brilliant.