December Viewing ~ Home for the Holidays

I'll be home for Christmas.
You can count on me.
I'll be home for Christmas.
If only in my dreams.
As I looked over the movies I viewed this month, I realized that December was all about going home. These are movies that will be forever intertwined with memories of my mother who introduced them to me. Though we may be miles apart, a piece of me goes home every time I view them.


Whenever The Long, Hot Summer is on, I am compelled to stop and watch it--not because I am particularly enamored by the plot or characters. No, I view it because Long, Hot Summer reminds me of my mother. It is one of her favorite films and as such we viewed it many times together. I maintain that Ben Quick (Paul Newman) is a dirty, rotten scoundrel and that Clara (Joanne Woodward) deserves much better. I get that he had a rough childhood and is paying for his father's sins. However, he did con the local men into buying wild horses without blinking an eye. I will concede though that he is an awfully cute scoundrel and worthy of our female gaze. Another reason to stop and watch it.

New observation this viewing: Previously I thought Eula Varner (Lee Remick) was the stereotypical trophy wife without a backbone or a brain. This time around I noticed that when her hubby Jody (Anthony Franciosa) decides to stay home and wants to get frisky with her, she draws the line, telling him that she wishes he would find another "pastime." He concedes and while her character appears bothered by his hurt, she does not yield. Her body is her own. There is a sliver of strength in her after all.


I'm not sure how it is done elsewhere, but in our household movies prompted discussions about serious subjects, including boys and the birds and the bees. You could say A Summer Place and Where the Boys Are were my coming of age films. When I first viewed them, I was experiencing the same inner conflict and questions the female characters (portrayed by Sandra Dee - Summer Place; Dolores Hart, Yvette Mimieux, Paula Prentiss - WTBA) were. I learned the more serious consequences of irresponsible behavior: pregnancy or--in the worst case scenario--rape. Mom and I discussed the neatly tied up, happily-ever-after Summer Place plot and how unrealistic it was. And although some argue Where the Boys Are blames Mimieux's character for her rape, I never saw it that way thanks to talks with my mom. Instead I viewed it as a warning to be wary of my surroundings and not go somewhere alone with a guy I had just met. When I see these films now, I think of my mom and the important conversations which stemmed from watching them together.


I don't think I'll ever get enough of this one. I must have watched it three times this month (well, kind of, I was wrapping for two of the viewings). As dances go, "The Best Things Happen While You're Dancing" is my all time favorite number--second only to Eleanor Powell and Fred Astaire's "Begin the Beguine" routine in Broadway Melody of 1940. My love of the dance goes back as far as I can remember. I recall "dancing" around the couch to the number while my poor mom tried to watch the film.

I regret not seeing this film on the big screen last year. Granted it was due to forces beyond my control (illnesses), but I can only imagine how fabulous and vibrant the colors must have looked. Costume designer Edith Head and the set designers outdid themselves with this film. The contrast between costume and set makes the entire scene pop. 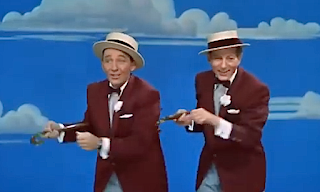 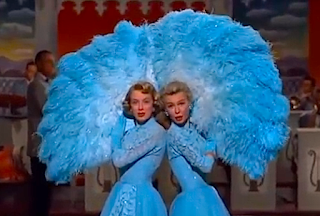 Then blue on red...
Bonus: Blue dress brings out blue in Rosemary's eyes. 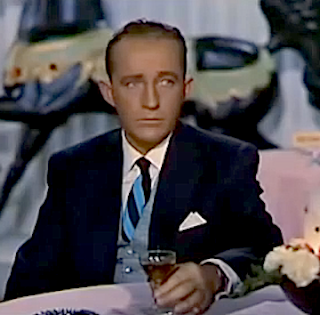 The blue in Bing's tie brings out his blue eyes. 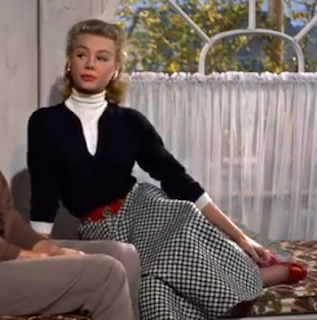 The red accents are fab: belt, shoes, and nails.
The neutral background does not interfere.


I introduced It's a Wonderful Life to my Drama Club this month. Their reaction to scenes engrained into our culture was priceless. 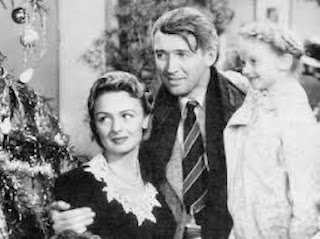 Every time a bell rings, an angel gets its wings.

"Isn't that from that one commercial!" they exclaimed. I chuckled and reassured them that they were viewing the original. Once they had context, the scene became so much more than a gimmicky advertising appeal. The students laughed and cried at all the right places. I couldn't ask for a better crowd with whom to share this special Christmas film.


And a new tradition for my own clan....


The crew actually requested this one! My son was home ill, and I had to decline his request until his older brother got home so we could watch the movie together. We skipped the black face number, but not before a serious conversation about racism. In a way, I have not strayed far from the tradition I grew up with. Like my mother's home, movies have become the force behind important social discussion.

Oh--and for the record, their favorite scene is Fred's dance with firecrackers. 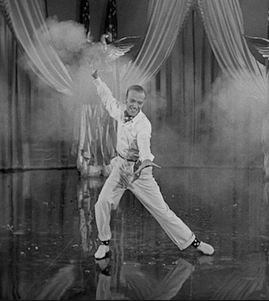 Fred lives on for another generation. I couldn't be prouder.