It is almost three months late, but here is the conclusion of my TCM Film Festival adventure. (Curious about the first days? Click for Day One and Day Two.)

Since mom spotted me for 42nd Street, I covered the cost of Calamity Jane. (Both were not included with the basic pass, but we love our musical comedies, so it was worth it. Say, that's an idea...a musical comedy pass!)


By now we knew where we were going and how the routine worked. After getting our line numbers, we decided to go Hollywood Star searching while the traditional LA tourists; i.e., Michael Jackson star seekers, were sleeping in. You will notice a theme--all things music and dance related:

While we were at it, we took a gander at the hand- and footprints in front of Grauman's Theatre. 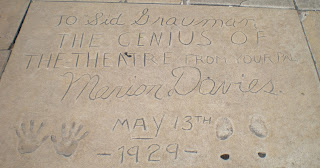 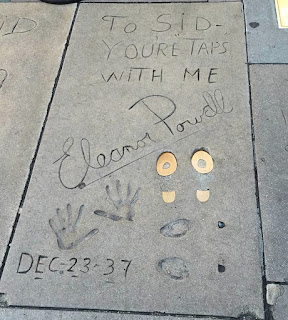 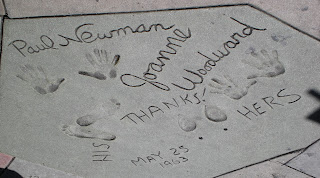 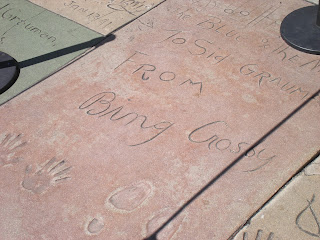 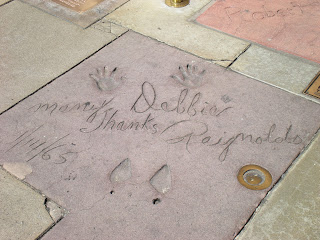 Then it was show time for a very special movie. Mom introduced me to Calamity Jane in my preteens, and it quickly became a favorite "mom and me" movie (a movie we returned to year after year, sharing popcorn until I graduated to frozen margaritas). While we waited for the movie to begin, mom informed me that I was not the first person she introduced to the Doris Day flick. During young adulthood, she acquainted a couple of friends to the movie--one of whom was a rather reluctant male. He never let her live it down. (I guess the apple doesn't fall far from a tree. Unbeknownst to mom, I introduced an unwilling boyfriend to watch Yankee Doodle Dandy with me. He wasn't thrilled, but he married me anyways.)


On seeing this Warner Brothers Technicolor musical on the big screen: WOW! What an amazing experience!!!! The colors--from the costumes to the scenery to the lipstick to the blue in Doris Day's and Howard Keel's eyes--were incredibly vibrant. Doris Day lit up the screen. Her singing gave me chills, especially during her famous song, "Secret Love." I am now addicted to seeing Day on the big screen and want more! Hopefully TCM will be able to line up more of her films for the next festival.


I am sad to say that after Calamity Jane, I had to call it a day as I completely succumbed to the illness that had been hanging over me the days prior. Unfortunately I missed all of the great Kate's movies, including my beloved Philadelphia Story. I've been hoping Fathom might release it in a special 75th anniversary showing, but it doesn't look like this will come to be. I don't know when, don't know where, but I choose to believe that I will eventually see Philadelphia Story on the big screen.


My first year at the TCM Film Festival was definitely a learning experience. I enjoyed the adventure and look forward to returning next year--hopefully in full health, so I can watch more movies!

Interested in joining thousands of other classic movie fans on the annual pilgrimage to Hollywood? Find more info about the TCM Film Festival here.
Posted by Bonnie at 7:00:00 PM