It's Thanksgiving week which means the countdown to Christmas has begun (although if commercials and store decorations are any indication, the shotgun was fired the day after Halloween). While some might hum and hah like Ebenezer Scrooge, I am one of those silly souls who can't wait to switch the station to 24/7 holiday music, deck the halls, and compile the holiday movie viewing list. Since Christmas movies in November can transform my hubby into a humbug, the first film of the season must be carefully chosen. This means the flick cannot be strictly classified as a "Christmas" movie. The answer to this conundrum: Holiday Inn (1942). 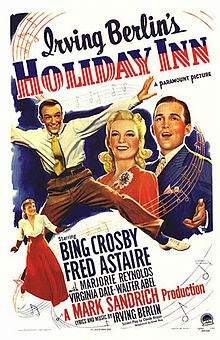 What better way to kick off the holiday season than by watching a cinematic celebration of the year's holidays?

The film features two greats: Fred Astaire and Bing Crosby. The movie marks one of two times they were paired (the other being Blue Skies in 1946), which means the best of both worlds--dancing and singing. 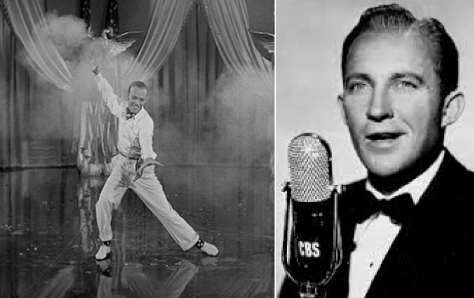 Holiday Inn introduced Irving Berlin's "White Christmas," which went on to become one of the most beloved Christmas songs of World War II. The song was an anthem for soldiers far from home, many separated from their loved ones for the first time. One might imagine the impact of the lyrics longing for a white Christmas, especially on soldiers fighting in the tropical Pacific Front. The song itself may have been inspired by the snow-absent surroundings of the Arizona Biltmore. (Although another story claims that Berlin wrote it in La Quinta, California--also a location lacking in snow.) The song remained the number one single for five decades (until Elton John's "Candle in the Wind," a tribute to Princess Diana following her death - TCMdB).

Additionally, Holiday Inn became one of the first patriotic productions of the war with its Fourth of July celebration mid-movie. The number begins with Crosby's "Song of Freedom" and a montage of video clips featuring the Army, Navy, Air Force, and everyday civilians at work. Even President Franklin Delano Roosevelt (FDR) makes an appearance in the clip. The lyrics and video montage remind viewers of the many freedoms at stake should they not do their parts in the war effort. Shortly thereafter, Astaire gives a spectacular dance performance involving firecrackers. Astaire fondly remembered the routine in his biography, Steps in Time:

It was a great satisfaction, that dance, being able to explode things expressing emphasis on beats here and there. Sometimes you want to bang your feet down so hard in a tap dance that you get shin-bucked or stone-bruised. In this one I had a completely satisfactory outlet with those dynamite noises. (249) 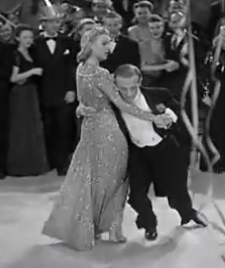 Another notable performance is Astaire's drunk dancing scene. As only an expert dancer can do, he flings his body and Marjorie Reynolds around the dance floor. His convincing portrayal of inebriation may not have been completely fictional. According to Astaire, "I had to look plenty drunk in that bit and figured there was only one good way to do it. [...] I took two stiff hookers of bourbon before the first take and one before each succeeding take" (250). They filmed a total of seven takes.

For all of its virtues, Holiday Inn has a vice that resulted in limited showing of the film in recent decades: Bing Crosby's and Marjorie Reynold's black-face performance in "Abraham," which depicts African Americans as simple-minded and illiterate. To make matters worse, Crosby's maid, Mamie (Louise Beavers), sings a lyric during said number in which she praises Lincoln for freeing "the darky." The portrayal sends a message that all is well with the African American population when in reality huge injustices were occurring at the time. I am further perturbed by the racist portrayal of Crosby's maid and her children, especially when the children are dressed up as Father Time and Baby New Year. The little girl, who is about five or six, is dressed in a diaper and no shirt. Would they have dressed a little white girl in such a manner? I wonder. (Of course, there is the blonde Coppertone baby. Maybe this is less of a race and more of a gender issue.)

If you can get past the "Abraham" number (with today's technology, this is not too difficult to do--or just use it for a potty/snack break like me), Holiday Inn has a lot to offer in way of historical holiday spirit. In addition to introducing "White Christmas" and incorporating one of the first WWII patriotic productions, Holiday Inn captures the now forgotten controversy over the date of Thanksgiving. From 1939 to 1941, FDR moved the holiday up a week in order to extend the Christmas shopping season, boost sales, and help end the Great Depression. There was a huge uproar resulting in some states celebrating only the traditional Thanksgiving (last Thursday of the month), some only "Franksgiving" (FDR's date--the second to last Thursday of the month), and a few celebrated both. Eventually, Congress stepped in and made the final decision: Thanksgiving was to be celebrated on the fourth Thursday in November. The cartoon turkey in Holiday Inn illustrates the confusion over the date during the year the film was made (production began in 1941).

Finally, the film features one of the only Thanksgiving songs written (okay, maybe there are more, but I don't know of them), and it is sung by Bing Crosby, whose voice will be forever associated with yuletide joy. 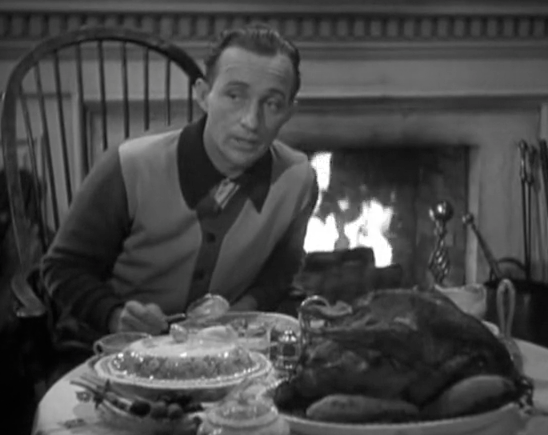 I've Got Plenty to Be Thankful For - click to see clip