Watch any television program with a high female demographic or flip through a magazine intended for women, and you will be bombarded with countless ads peddling beauty wares. The desire for immortality is as old as Ponce de Leon's search for the Fountain of Youth, but the added emphasis on female beauty is what has survived to current times. 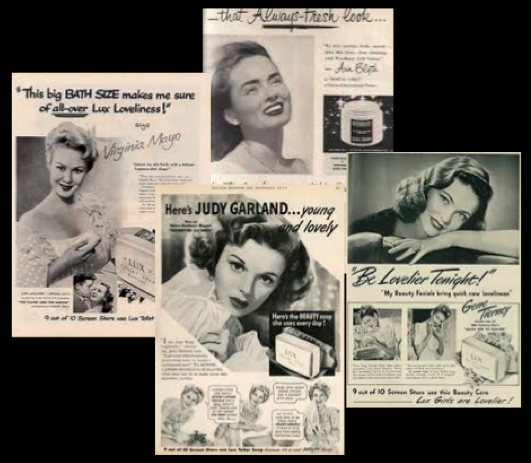 Attaining the idealized vision of beauty is not an easy process, no matter what the age (although the time to get ready seems to correlate with how old you are). There is much work to be done. Plucking of eyebrows, manicuring of fingertips, pedicuring of toes. Straightening of curly hair. Curling of straight hair. Mascara. Lipstick. Blush. Bronzer. Moisturizers, cleansers, anti-aging serums. Creams. Creams to tighten skin, creams to get rid of bags under the eyes, creams to prevent acne. And let us not forget the diets. Atkins diet. South Beach diet. Anti-carbohydrate diet. If all else fails, there are also body shapers: corsets, girdles, and spanks--oh my!

Along with advertisements, movies have taught women that glamorizing themselves is a necessary evil. 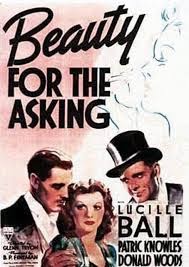 One movie with this message is 1939's Beauty for the Asking starring Lucille Ball as Jean Russell, a woman who has invented a magic cream that acts as a makeup foundation, tightens facial muscles, and gives a facelift--all at the same time. Per Leonard Maltin, author of Classic Movie Guide: From the Silent Era to 1965, the movie showcases Lucille Ball's talent (I concur!) and provides "an interesting feminist viewpoint" (TCMdB). I can understand where he gets this perspective of the film. Less than ten minutes into the flick, Jean gives a refreshing vision of marriage, "Why should a woman stop using her brains just because she's caught her man?" She further explains to her fiancé, Denny (Patric Knowles), "That's what's going to make our marriage a success. We're both gonna give it everything we've got."

Jean is jilted by her beau but does not let that stop her from achieving her entrepreneurial dreams. Her cold cream makes her a successful--and wealthy--businesswoman. In the end, she teams up with Flora Barton (Frieda Inescort), the woman who unknowingly stole Jean's man, but whom he leaves as well. In addition to girl power, though, the movie also pushes the message that beauty is king (or queen?), and if a man is tempted to go elsewhere, it may just be because you are not living up to the ideals of beauty.

Jean to Flora: Any high school girl knows that you've got to hold back a little. Let the man do the pursuing. The chase, Flora. The chase.

[The message: Be a demure, pretty creature. Not too aggressive.]

Jean to Flora: It takes a lot of effort to be beautiful, Flora. [...] You have to wrest your stomach, exercise your will-power until you get so hungry you could scream and so tired you can't. But, boy, are the results worth it!

Jean calls in someone to trim a picture of Flora's silhouette. She explains that Flora will be able to attain the new form "after six weeks of torture." Flora complains about the "torture" in a series of vignettes. Each time, Jean reminds her that the pain is necessary.

Flora: In another three weeks my stomach won't be big enough to hold an olive.

Flora: Is it worth it? That's what I want to know.

Jean: It's worth it to the people who have to look at you. 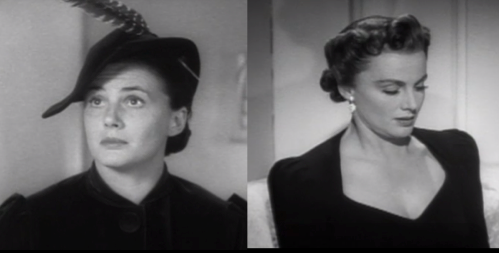 Flora before and after thanks to pal Jean.

Flora achieves her beauty, but loses the man nonetheless. However, the sense is that the error is in the man, not the added effort of beauty. He is not worthy of her. 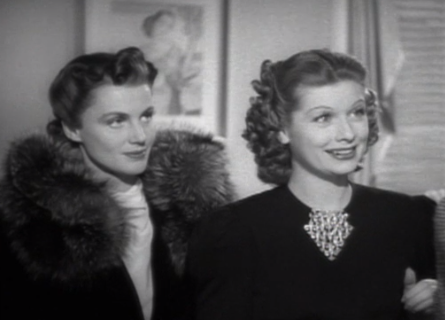 Beauty and brains: Flora and Jean

Beauty for the Asking is not the only film which contains the sentiment that painful transformation is a natural part of achieving the greatest heights beauty. In Auntie Mame (1958), Mame (Rosalind Russell) meets the complaints of transformed Agnes (Peggy Cass) with: "Good. If you can breathe, it's not tight enough." 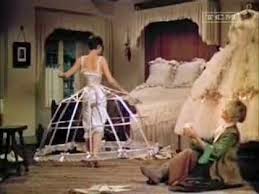 In The Glass Slipper (1955), this bit of dialogue occurs between Cinder Ella (Leslie Caron) and Mrs. Toquet (Estelle Winwood), the Fairy Godmother figure, while Ella gets dressed for the ball:

Mrs. Torquet:  All women must endure these discomforts.

Mrs. Torquet: For fashion. It fascinates men. Makes them marvel at women. Fills them with awe. (She chuckles.) Because they know they couldn't stand it.

Like Beauty for the Asking, both Auntie Mame and The Glass Slipper center around strong women. But for all their brains and strength, they still must succumb to the pains of looking beautiful.

Forward-thinking or backward? What do you think?


Want to see the movies I mentioned?