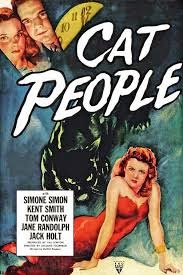 Cat People (1942) was an unexpected success. Despite its limited budget and initially being panned by some illustrious critics (The New York Times' Bosley Crowther for instance), the film was a huge hit with audiences. This fluke had critics rubbing their heads, so they went back and watched the movie again. The film proved itself and--to use a term from the genre--it rose from the dead in the eyes of the critics, prompting their praise.

What had the audience caught that the critics had missed?

Many point to Jacques Tourneur's direction and how he is able to instill fear in the viewer sans blood and gore. Indeed the film is rather silent, forcing its audience to strain their ears to hear the dialogue. This makes the clicking of heels or low growl of a panther all the more adrenaline inducing. In America's Film Legacy, Daniel Eagan also credits editor Mark Robson for some of the suspense: "By altering the tempo of cuts, by juxtaposing wide shots and close-ups, Mark Robson builds tension out of thin air. A sudden noise becomes the equivalent of a shriek" (359). The audience keeps waiting for something to pop out of the shadows, but nothing ever does (that would have cost money). The fear is psychological.

This may be why Cat People is considered a landmark film today, but there is so much more to the movie than new scare tactics. At its center is Irena (Simone Simon), who fears passion will turn her into a deadly panther. Through the course of the movie, we are taught that female sexuality is dangerous and should be repressed. As long as she resists her urges, her husband Oliver (Kent Smith) is safe. Passion can rear its ugly head in more ways than consummation of marriage, though. Jealousy of her husband's properly repressed co-worker Alice (Jane Randolph) causes her transformation--always implied, never seen to maximize suspense. The message is twofold: female sexual repression is good while female jealousy is bad.

Messages about assimilation into American culture also emerge in Cat People. Made during the beginning stages World War II, Irena represents those whom Americans feared. As much as she tries to belong, Irena is marked with the scarlet "O," that of otherness. She is from Serbia, from a little village with customs her husband and his co-workers cannot understand. She speaks with a distinct accent and is acknowledged as "sister" by a fellow foreigner (Elizabeth Russell). When her husband's friends laugh at this strange woman, it is Irena at whom they are laughing, although they may not realize it at the time. Irena is an outsider. She does not and cannot belong. She dies, leaving behind the foreign form Oliver and Alice cannot understand.

Cat People also covers psychiatry in its messages. Dr. Judd (Tom Conway), the psychoanalyst, becomes the King John figure, purging the city of sin by curing sick minds. He also carries a sword of sorts: a blade within his cane (much like the one Ballin Mundson uses in Gilda). Dr. Judd eventually uses the blade to slay the cat-version of Irena, but he is unable to save his life. Had he truly listened to Irena during their psychoanalytic sessions instead of focusing on his own righteousness, he may have still been alive. His death represents the American public's lack of faith in psychiatry.

The success of Cat People was a pleasant surprise for RKO. Its use of sound, camera angles, and film cuts gives the movie a haunted feel and makes it a fun pick for Halloween. However, it is the messages that gave the movie double appeal to audiences who questioned female sexuality, foreign residents, and psychiatry.

[Side note: You can catch Cat People on TCM Friday, October 31st at 8 am PST.]