Double Standards in the Bedroom 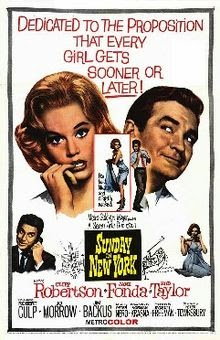 A few months ago, I discovered Sunday in New York (1963), a gem of a film that questions society's dividing line between madonna and whore. In less than ten minutes, Sunday in New York cuts to the chase when Eileen (Jane Fonda) asks her older brother Adam (Cliff Robertson),

"Is a girl that's been going around with a fella a reasonable length of time supposed to go to bed with him or not?"

Her brother gives an emphatic no, so she rephrases the question. "Is she expected to?"

Despite being the virtuous girl, the madonna, Eileen's long time beau has dropped her because she wouldn't--to use the lingo of the movie--loosen her morals. This isn't the first time she has lost a boy for this reason. So what will big brother say--big brother who has intimate flings unbeknownst to sister? I bet you can guess.

And how exactly did we know this would be his answer in spite of his own amorous activities? Because when it comes to the bedroom, Hollywood has taught us there is a double standard between men and women. While men are allowed, nay, expected to sow their oats, women concern themselves with maintaining their reputations and reforming their wayward men. 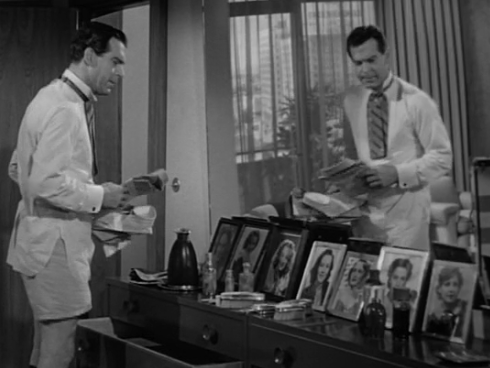 Frank Sinatra's parade of women in The Tender Trap (1955),

and when Jean/Lady Eve (Barbara Stanwyck) wants to punish Charles (Henry Fonda), she knows the surest way is to marry him and then reveal an unholy history.  It is through her virtue, that a woman wins the grand prize: marriage (granted the pursuit of marriage as an end goal is a bit dated--although if the wedding industry is any indictor, we remain a marriage-centric society). Eileen has found the message false; she has been virtuous and "lost quite a boy." She questions the black-and-whiteness of labels:


"The catch is in the word decent. It seems to have a comparative connotation. Like the girl who was a little bit pregnant."

Indeed, the decade prior saw plenty of girls arrive at the alter "a little bit pregnant" (National Vital Statistics), suggesting that sometimes "decent" girls give in.

When Eileen discovers her brother's hypocrisy, she attempts a fling of her own with an unsuspecting stranger, Mike Mitchell (Rod Taylor). Mike--like her brother--has had experience with women, but when he finds out Eileen is a "beginner," he won't go through with the seduction. He explains that there are two kinds of girls, and she doesn't belong in the group who has "affairs."

Ah yes, the dichotomy of the female race. A quick gander at Saved! (2004) or Easy A (2010) will illustrate that Sunday in New York retains its relevance. No matter how far we say we've come from the 1960s, the truth remains that women are still divided into two categories. And while Sunday in New York goes easy on the language, we know that one group of gals receives derogatory titles based on their sexual activities whereas men are not so classified. Or if they are, it is done by taking a female derogatory term and adding "male" to the front of it. Point being, there is no male-exclusive equivalent. The double standard.

The movie attempts to break free from pigeon-holing women into two types. And in some ways, it does. On the sidelines,   Mona (Jo Morrow) is perfectly willing and eager to meet Adam for one of their romantic jaunts; it is evident she is not a beginner. A series of comical mishaps prevent their affair, and by the end of the evening, Mona gets what every girl wants (according to another message in the movies) from Adam: a proposal of marriage. It may seem to be a result of staying chaste this particular Sunday, but she is virtuous through no fault of her own. Remember Adam's words earlier in the film?

In his proposal, the movie redefines "decent."

Eileen also gets the boy. While the voiceover at the end of the movie would have the audience believe that "nice things [...] happen to a girl if she remains virtuous even on a rainy Sunday in New York," we know it was not through Eileen's own doing that she remains virtuous. There is a hint that she may not make it through the night. We last see her in a passionate embrace with her new fiancé. The room is dark and they are wearing only pajamas.

In his February 1964 review of the film, Bosley Crowther comments that Sunday in New York, in the light of "the past 10 years, [where] the once-unmentionable has been discussed at almost tedious length in films," is "a wee bit old-hat." Old hat is the voiceover; however, if you look closely at the peripheral and peek around the corner, there is a new message trying to break through.
Posted by Bonnie at 5:12:00 PM