A Tribute to Lauren Bacall

The movie that introduced me to Lauren Bacall was The Big Sleep (1946). I was twelve and didn't have an inkling as to what was going on. Since then, I've seen the movie over a dozen times. I still am not completely positive on what is occurring, but according to many film critics' analyses, I'm not in the minority. Regardless of my level of understanding, I fell in love with the film. More specifically, I fell in love with Lauren Bacall. 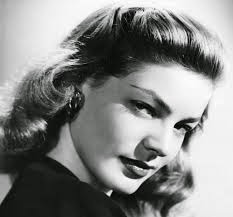 I was drawn to her. Her throaty voice. The way she was tough, yet exuded sexiness at the same time (her wiggle dance at the end of To Have and Have Not (1944) is a fabulous example of this - see below). She had an edge. She was dangerous, a little bit bad but not unforgivingly so. Here was a woman who was flesh and blood, not categorized as virgin or victim. Here was a woman I wanted to grow up and become.

She also had swagger--there was no doubt she could keep up with the boys (and growing up the only girl among boys, this was an extremely important characteristic in my young eyes). My later discovery that she--along with hubby Bogie--was one of the original members of the Rat Pack only confirmed my suspicion that she could hang with the boys.

All this and she had style too. My college years introduced me to such classics as How to Marry a Millionaire (1953) and Designing Woman (1957), in which fashion took center stage. I was often so engrossed in the fashion of these films that I forgot to follow the plot. Oh that gorgeous purple and white number with those incredibly impractical, yet breathtakingly beautiful puff sleeves! Yes, this was a woman I wished to emulate.

So when the news came that she had passed, I couldn't help but be filled with sorrow. And when TCM shows their tribute clip to her, my eyes water (should I be embarrassed by this?). I know she was 89, a good age with a full life. But there was something special about Lauren Bacall. She was my hero, my role model. The only consolation in her death is the knowledge that she is reunited with her Bogie at last.