A combination of prep work for this year's Dancing Legs quizzes and a star search for In the Good Old Days of Classic Hollywood and The Wonderful World of Cinema's Marathon Stars Blogathon brought me to the sad realization that many of the world's greatest tap dancers are missing from our public consciousness and film library. Dancers who made possible the likes of Fred Astaire, Hermes Pan, and Eleanor Powell but were pushed aside due to the color of their skin. Dancers who were as talented as Ann Miller or Gene Kelly but never given a fighting chance in Hollywood. Instead their dance routines are limited to decaying film reels or descriptions in a textbook. Today's post is a small step in trying to ensure their legacy is not lost.

For the record, I strongly believe that the celebration of these dancers should not be limited to one day or even one month of the year. I plan to make a concerted effort throughout 2016 to view the rare film appearances of these incredibly talented dancers.

Jeni LeGon was a solo tap dancer whose athletic movements were every bit as good as the male dancers of her day.  After dancing with Bill "Bojangles" Robinson in RKO's Hooray for Love (1935), she scored a contract with MGM. According to dance historian Constance Valis Hill, LeGon was slated to perform in Broadway Melody of 1936, an Eleanor Powell star vehicle, but was taken off the assignment after LeGon "stopped the show" at a promotion event that included Powell. Per LeGon in 2006:


It was a color thing. They said they couldn't use two tap dancers, but that was bull corn.

From then on, MGM neglected her talent, opting to put her in servant roles instead. The biggest snub must have been when she played maid to dancer Ann Miller in Easter Parade (1948). It is a crime that her dancing skills were squandered. 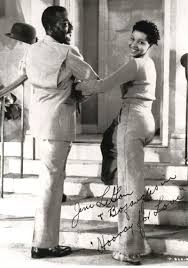 Jeni LeGon and Bill "Bojangles" Robinson in a publicity shot for Hooray for Love (1935)
Click here to sample their dancing. 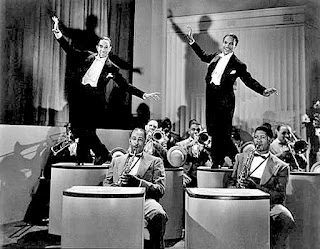 Thanks to entities like TCM, which recently featured the Nicholas Kids in an online promo, Fayard and Harold Nicholas will not be forgotten. The Brothers were known for their energetic dancing which included acrobatic jumps, splits, swinging arm movements, and taps that perfectly complemented big band tunes. Due to the time period, they only appeared in clips that could easily be cut when the film was shown in certain markets. With their singing and dancing talent, it is a shame that they never had the opportunity to carry a film like Bing Crosby, Danny Kaye, or Fred Astaire. That would have been something!

Watching the Berry Brothers is like watching three Fred Astaires with the athleticism of the Nicholas Brothers. Ananias, James, and Warren Berry danced in top hats, tails, and twirled canes in between back flips, splits, and other acrobatic lifts. In the following clip, notice how they begin with their dancing shadows similar to the beginning of Astaire's "Bojangles of Harlem" number in Swing Time (1936).


Unfortunately, I cannot place the clip, so I am not sure if this is pre- or post-Swing Time. However, I do know that Astaire worked with and learned from colleagues regardless of color during his vaudeville days.

Honi Coles and Charles "Cholly" Atkins were one of the last "class acts." The two were known for their soft shoe dance interspersed with each partner's individual specialty steps. 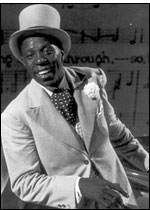 John Bubbles, the dancing half of Buck and Bubbles and the original Sportin' Life in George Gershwin's Porgy and Bess (1935, Broadway show), changed the tap world with a new style of dancing in which he "dropped the heels on the offbeat, used the toes to accent, and extended rhythmic patterns beyond the usual eight bars of music" (Library of Congress).


In other words, the guy could tap incredibly fast and used his feet to riff like a jazz musician.

Interesting fact: Eleanor Powell and Fred Astaire have Bubbles to thank for their success (at least in part). During their vaudeville days, Bubbles and Powell ended up on the same bill. Bubbles taught Powell his signature heel-drop style, and they experimented with steps backstage. Astaire also held Bubbles in high regard. Bubbles is said to have influenced his "Bojangles of Harlem" dance routine. If you watch Astaire's number next to Bubbles' you will notice remarkably similar footwork. 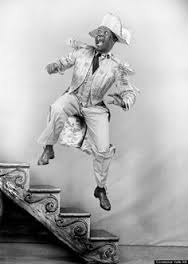 A publicity shot for The Hot Mikado (1939, Broadway show)

Of the dancers in this post, Bill "Bojangles" Robinson is probably the most remembered because of his recurring partnership with Shirley Temple. Together they filmed four movies. Fortunately, he performed one of his signature dance moves in The Little Colonel (1935)--tapping up and down a staircase--preserving it for future generations to enjoy.

Robinson was generous with his dancing knowledge. According to Hills, he shared his steps with not only little Shirley Temple, but also Eleanor Powell, Adolph Menjou, and others. His pay-it-forward attitude may have helped cement his name in the American consciousness when appreciative and admiring dancers paid tribute to the man who was not allowed to dance with them due to the color of his skin. Notably, Powell honored Robinson with a performance in Honolulu (1939).

Though Robinson and Powell performed at society parties, they were not permitted to dance together on film. So Powell did what she believed to be the next best thing. Dressed in his likeness (yes, this did include darkening her face), she dedicated a dance in his honor. [In the movie, her character is going to a costume ball in which she must dress up as her favorite entertainer.] Astaire would do the same in "Bojangles of Harlem." What was meant to be a tribute is now frowned upon and called racist. There is no doubt that there are blackface numbers that should be described as such--a perfect example is "Two-Faced Woman" in Torch Song (1953) (see my discussion here). However, Powell and Astaire tried to capture their colleagues' dances on film at a time when society would not accept the African American dancers themselves. If not for channels like TCM, their movements might be limited to the page, erased by a well-meaning society unaware of the context of Powell's and Astaire's taps. (For more reading on this, see "Astaire the Artist, Even in Blackface" by Alastair Macaulay of The New York Times.)
~
This list is by no means complete. There are many more dancers whose work deserve our appreciation. I look forward to discovering them and sharing their work with you.