A few weeks ago I shared the results of my 10 for 2015 movies-to-watch list. I managed to view a measly 50% of the films on the list, so I am giving myself a more attainable goal for 2016. (I figure I can always increase the goal in 2017 if I succeed. It's kind of like training for a big marathon. You don't run the full 26 miles at the beginning. You work up to it. At least, that's what I've heard...)

Here's the plan: view one movie from the list every other month. This will give time to watch, process, write about the movie, and also allow for uncharted film discoveries along the way.

1) Why Be Good? (1929) - This movie keeps popping up on the Twitter feed. With a title to match the Jazz Age attitude and a pixie flapper like Colleen Moore, I expect this film to be a time capsule of the Roaring Twenties. Can't wait to travel back to fringe, speakeasies, and the Charleston. 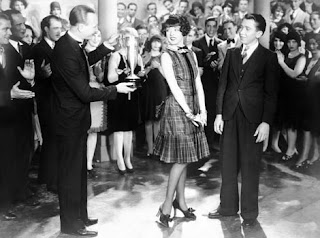 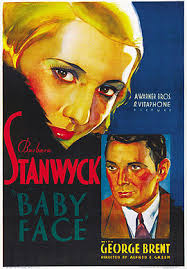 2) Baby Face (1933) - I am ashamed to admit I have never viewed this pre-code staple. I hear Barbara Stanwyck gives a phenomenal performance as a tough broad who uses her sex appeal to rise through the ranks of society. Looking forward to another strong Stanwyck character and seeing how far the filmmakers go in the absence of enforced code.

3) Assignment in Brittany (1943) - This puppy has been sitting on my DVR since TCM's Join the Resistance programming in November. Films about WWII before we knew the outcome of the war bring out the inner student in me. I love to analyze the propaganda and societal perception then compare the events to actual history.

4) We're Not Married (1952) - I have wanted to view this film since I read about it in Jeanette Basinger's book, I Do and I Don't. Five married couples discover that they are not married--sounds like the recipe for a movie full of silly hijinks, a Mr. and Mrs. Smith (1941) times five. Bonus: The movie features an array of stars. 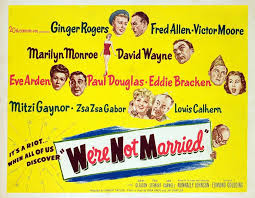 5) Hooray for Love (1935) - This film features the dance that led to MGM signing Jeni LeGon. She taps with Bill Robinson while Fats Waller plays the piano. According to dance historian Constance Valis Hill, if not for her color, LeGon could have been the "Ruby Keeler" of her day. I've seen a clip of LeGon and Robinson's dance. Ready to see her in full action now.

6) Tomorrow is Another Day (1951) - I plan to view this film noir for my series of Taxi Dancer film reviews. From what I've read, it looks like another example of a man being crossed by one of these dangerous women. Sensing a theme.

Email ThisBlogThis!Share to TwitterShare to FacebookShare to Pinterest
Labels: 6 for 2016