Since my last viewing update in mid-September, I have been immersed in the community college and middle school worlds of lesson planning, teaching and grading. Life is busy but good. My students are fantastic, my colleagues are supportive and my family has been incredibly understanding of my crazy hours. Now and then I even get to catch a movie. Here is what I have been up to classic movie-wise: 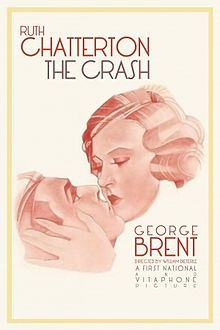 *Impressed by Ruth Chatterton's performance in Female (1933), I DVR-ed The Crash (1932) last June. I finally got around to watching it in September. The film stars Ruth Chatterton and her husband at the time, George Brent. Her role is no more than a glorified prostitute, trading herself for stock secrets to assist her Wall Street banker hubby in getting ahead. The turning point occurs when Linda's (Chatterton) sexiness fails, and she is unable to obtain crucial information. Unwilling to admit that she has lost her pizzazz--horror of horrors! as this is her only commodity--Linda lies, which results in everyone they know, from servants to the high-brow company they keep, to lose their shirts in the Wall Street Crash of 1929. She alone is plagued with guilt. At no point does the movie suggest that her jerk of a husband--equally to blame--should share the guilt. In the end, the intended message is one that the Depression Era audience would have wanted to hear: money is the route of all evil. (To avoid spoilers, I won't tell you how the message is achieved. Suffice it to say that the movie follows one of the formulas outlined by Jeanine Basinger's I Do and I Don't.) However, there is a more subtle message warning women of the dangers of getting old and not admitting it to yourself. Accept your place on the shelf of the once sexy, the movie tells viewers.


As for Chatterton's performance, I was less than awed. I agree with Ed Sikov's assessment in Dark Victory that "Chatterton's too-too glamour diction has long grown musty" (45). When I viewed Female, I thought her speech revealed her character. In Crash, her delivery began to grate on my nerves. Maybe my love of Female's story line clouded my judgement. I guess the only way to know for sure is to watch more Chatterton movies.

*At the end of one particularly exhausting week, I accidentally stumbled onto TCM's Bud Abbott and Lou Costello night. I caught Buck Privates (1941) and In the Navy (1941). Talk about adding instant fun to your Friday! I had forgotten how silly these two can be. Their illogical logic routines transported me back to childhood days when my brother and I watched their monster movies. After viewing the films, I decided to swap out Cat People for Abbott and Costello Meet Frankenstein during Drama Club lunches in October.

Both films (Privates and Navy) also featured the Andrew Sisters, who performed numerous tunes including a fav, "Boogie Woogie Bugle Boy." (The song was actually introduced in Buck Privates. There is an example of perfect timing for you! The movie was released in January 1941, and we were at war by the end of the year.) An added bonus: Lots of hot jitterbuggin'. By the end of the evening, I was practicing my lindy hop--a little difficult to do solo, but I proved to myself I remembered the steps.

The Drama Club has been a huge success. Participation is voluntary, but I have a solid group of eight students who come every drama day. In middle school, this is huge--especially considering that I am showing old movies.

Let me tell you: there is nothing like viewing a classic film with students who have never seen it before. It is like seeing Disneyland through the eyes of your children--pure joy!

*Two Characters, Same Actress - We viewed The Lady Eve (1941) and paid close attention to how Barbara Stanwyck transforms her character into Lady Eve. The students enjoyed Stanwyck's screaming flea from the snake, Coburn's and Stanwyck's tricky card play, Fonda's and Demarest's flustered falls at the mansion when Lady Eve appears, and Fonda's shock on the train as Eve confesses her many amours. Plus, the gals loved the romance.

*From Stage to Screen - Arsenic and Old Lace (1944) garnered nonstop giggles. Cary Grant's over-the-top expressions, the way his little old aunts (Josephine Hull and Jean Adair) misunderstood the gravity of their situation, and Teddy's (John Alexander) boisterous "Charge!" had the kiddos in stitches. At the same time, they were in constant suspense, repeatedly asking, "Are they going to find the bodies now?" and squealing each time a character brought a glass of wine to their lips. An added bonus: the quick mini-history lesson with appearance of "Teddy Roosevelt." (I was impressed that one of the students realized FDR was president at the time, but I still needed to clarify that there was another Roosevelt who was president at the beginning of the 1900s. It was a two-for-one lesson--they learned about two presidents thanks to Arsenic and Old Lace.) To date, this is the students' favorite movie.


*From Vaudeville to Film - As aforementioned, I decided to show Abbott and Costello Meet Frankenstein (1948). Overall the students appreciated the film--the boys more so than the girls. Some of the jokes were era-specific and the delivery was quick, so I think they went over the kids' heads.

*I joined the #TCMParty for a couple of movies during Haunted House evening: House on Haunted Hill (1959) and The Haunting (1963). By the end of House on Haunted Hill, I came to two conclusions: Carolyn Craig could out-scream Fay Wray and Vincent Price had a damn sexy voice. I wouldn't mind being trapped in a haunted house with Price even if he was the dark mastermind (or is he?) behind a murder or two. Perhaps this was my subconscious telling me that death would be preferable to Craig's screaming. Either way, I was smitten.

*For me, the most interesting part of The Haunting (1963) was its handling of lesbianism. While not central to the plot, the film nonetheless captures the disgust and condemnation towards the gay lifestyle in the 1960s. In one instance, Eleanor (Julie Harris) calls Theodora (Claire Bloom), the lesbian character, "unnatural" and one of "nature's mistakes." In another, Eleanor declares, "I'd rather be innocent than like you!"


Eleanor: What scares you, Theodora?

Theodora: Knowing what I really want.

The Haunting turned out to be more than a campy scare-fest and definitely worth a second view for its subtle social commentary. 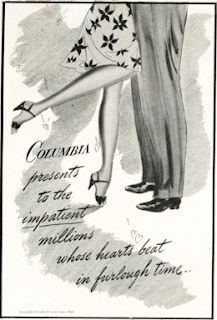 *I added The Impatient Years (1944) to my 10 for 2015 list because the film looked like it picked up where The More the Merrier (1942) left off. Indeed there were some direct connections starting with two of the main actors: Jean Arthur and Charles Coburn. Arthur plays a woman who met a soldier on army leave, fell in love, married and parted. (Sound familiar?) When her husband (Lee Bowman) returns, they discover they are strangers: his head is in the clouds and she lives by a list. They want to divorce. Her father (Coburn) works to keep them together with as much determination as Coburn's character in The More the Merrier. In fact, the "Damn the Torpedoes! Full Speed Ahead!" melody plays under most of his scenes--another reference to the earlier, more successful film. I don't know if it's because of a missing McCrea, Bowman's mustache, or the tired gag that plays throughout the film (we're married, we're not married...oh, they don't understand), but the magic is gone. The movie was advertised as an answer "to the impatient girls and soldiers who rush into marriage." If this is the answer, I'm not sure I'd still be married.

*TCM finally showed one of my guilty pleasures, Consolation Marriage (1931), as part of an Irene Dunne-themed day. It's been years since it has aired--and I enjoyed every minute of it! Per the November "Now Playing," TCM will show Marriage again in honor of Pat O'Brien's birthday. I have it permanently on DVR, but for those who missed it in September, it is scheduled for November 11 at 7:45 am EST.

Ciao until next time!