Hope in the Night 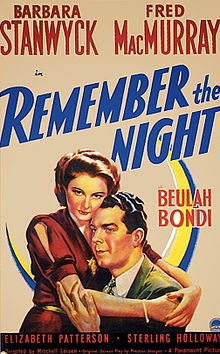 Remember the Night (1940) and I met quite by accident. One might think between my affinity for Fred MacMurray, admiration for Barbara Stanwyck, and passion for all things Christmas, I would have discovered this holiday film years ago. Alas, I happened to flip on the channel, and there it was, waiting for me. Kismet.

At first I questioned the premise. An attorney (Fred MacMurray) taking home a thief (Barbara Stanwyck) over the holidays? Really? Who would do that? But as I continued watching, the film pulled me in. There is a much deeper message than the surface summary would have you believe. The story is about the difference between being on the wrong versus the right side of the tracks, and what that can do to one's spirit.

Even before Jack Sargent (MacMurray) begins his trek home with Lee Leander (Stanwyck) in tow, the audience learns that Lee is no stranger to the darker side of life. After Jack posts her bail, she is dropped off at his apartment. He inquires as to why she is there, and she responds, "I don't know yet, but I have a rough idea." When Jack's servant (Fred "Snowflake" Toones) brings them glasses of Scotch and soda, Lee comments, "One of these days, one of you boys is going to start one of these things differently." (Print does not do Stanwyck's delivery of the line justice.) Although censorship forces the innuendo, we know "one of these things" is a sexual favor in exchange for freedom. "I suppose," she further reasons, "If anybody says no, you just put 'em right back into the cooler." On the contrary. Jack has no intention of taking advantage of her. This suits Lee, and the next thing you know, he has agreed to take her home with him.

Along the way, the two stop by Lee's home. Jack is surprised (as the audience is intended to be) by the cold reception Lee receives from her mother (Georgia Caine).  Lee's Christmas greeting is met with a gruff, "Come in," and a turned back as her mother leads them into a dark, drab house. Her mother questions why Lee has returned, and when Jack explains that they thought she would be glad to see her daughter, she snarls, "Glad? Why should I be glad? Good riddance to bad rubbish I said the day she left." An exchange between mother and daughter reveals that Lee's mother accused her of stealing when she had not and then tarnished her reputation in town: "Stealing as I always said she would," mother explains. Both Jack and the viewer begin to understand why Lee may have wandered down the wrong path. Lee's thievery is a classic case of living up--or down--to expectations.


This homecoming scene is juxtaposed with the warm reception Jack receives from his mother (Beulah Bondi) and aunt (Elizabeth Patterson). The women anxiously prepare the home. One bakes cookies while the other ensures the fireplace in his room is lit. When Jack arrives, they throw open the door, revealing the warm glow from within, and all--including the farm boy Willie (Sterling Holloway)--run to greet him. Jack's mother throws her arms around her son as soon as she reaches him. His aunt and Willie are not far behind.  This is an aha moment for the audience. No wonder Jack turned out so well--look at all the loving support he had!

Fortunately, Remember the Night does not leave us with merely an explanation of why some people become thieves and others successful businessmen and women. Remember the Night shows the redemptive power of love as Jack's family takes in, accepts, and loves Lee as one of their own. Over time (granted, this is a film, so very little time is needed compared to what would be needed in real life), the family's love transforms Lee. She repents and is determined to start anew. And with the love of Jack and his family waiting on the other side, there is a feeling that this time she is going to make it.  The film therefore ends on a message of hope: one's past does not predicate one's future. What better message than that of hope for the holiday season?