Message in the Movies: Jealousy and Forgiveness

One thing I love to do while watching movies is to catch messages, especially those I do not agree with or ones that society no longer finds acceptable (or thinks they no longer do). To the trained eye, a singular scene or line of dialogue reveals the social mores of the film's time period. Tucked neatly into the plot, the viewpoints are simply matter of fact, i.e. "this is the way it is," and it's a problem if the character does not conform. Since the viewer identifies with the character, the scene or dialogue sends the message that there is also something wrong with the viewer if he or she does not behave in the expected, "appropriate" way.

Jealousy is generally accepted and in men often encouraged. 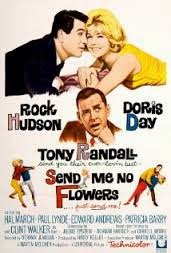 Take Send Me No Flowers (1964). Doris Day's character can't understand and is even suspicious when her husband is not jealous of her college sweetheart. This plot point is resolved when she assumes he is having an affair. You can almost see the thought form across Doris Day's face, No wonder he isn't jealous, he doesn't love me! In The Feminine Touch (1941), Rosalind Russell's character goes to great lengths to induce her husband's jealousy, which she equates with love, and is exasperated when he does not behave as expected. By the end of movie, the lesson is learned as he fights off two potential suitors and she beams triumphantly.

While men are encouraged to be jealous and women are allowed to be--especially when it results in a comedic escapade (such as The Awful Truth)--several movies incite women to forgive their men's "indiscretions."
In Philadelphia Story (1940), the father explains to his daughter (Katharine Hepburn), "What most wives fail to realize is that their husband's philandering has nothing whatever to do with them." He then blames his philandering on a reluctance to grow old as well as his daughter's lack of idolization of him. Love the movie (put it on to verify the quote and watched the whole thing), but the line kills me every time.


In The Women (1939), the mother of the main character (Norma Shearer) advises her daughter to ignore her husband's affair. She further rationalizes her son-in-law's actions by explaining that she has also experienced a philandering husband. In other words, a cheating husband is a natural part of marriage. When Norma Shearer's character goes through with a divorce, she regrets not heeding her mother's advice, stating that all she has now is pride. In both this film and its 1956 musical version, The Opposite Sex, the woman eventually forgives her husband--pride be damned--and gets him back. The message sent is that it is more important for a woman to look the other way and forgive her cheating spouse than to divorce him and face the world alone.


Despite the messages, I still enjoy all of the above mentioned movies. There is much to be praised in plot, witty dialogue, and other thematic messages, not to mention fun, goofiness, and gorgeous costumes. At the same time, it's important to be aware of the subtext in anything one views.