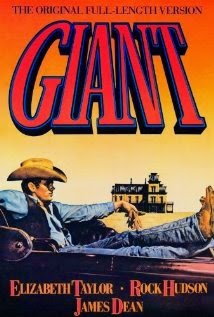 What a great movie! Made in 1956, the film was ahead of its time. In an era of subservient stay-at-home wives and racial segregation, audiences are introduced to Leslie, a strong-minded woman who defies her husband in a number of arenas for the common good. When her husband attempts to exclude her from political talk, she puts up a fight, explaining women are just as capable as men to discuss politics. When she sees the poor living conditions of the Mexican Americans who live near their ranch, she ignores social taboos—and her husband’s wishes—and helps them, walking through their dilapidated neighborhoods, even going so far as to call in a doctor who treats only rich white patients—gasp!

Leslie also does not believe in forcing her son to follow in his father’s rancher role if the child doesn’t want to. At one point, she decides it is time to take the children and go live with her mother—Hollywood code for ‘time for a divorce’—because she and her husband cannot see eye to eye. Leslie and Bick end up staying together, but when they do, it is a result of Bick going to Leslie, not her going back to him. With all this breaking of social norms, one might expect her character to be punished as was the Hollywood rule with disobedient characters. However, quite the opposite occurs. Instead, it is her husband who changes. This sends a new message to audiences: women should be allowed to converse with men about politics, racial inequality is a crime, and children should have a say in their future. This movie foretells of issues that would be making headlines within the decade. Powerful. 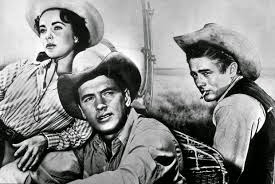 As a bonus, the star line up includes Elizabeth Taylor, Rock Hudson, a young Dennis Hopper (not pictured), and—in his final of three film roles—James Dean.
Posted by Bonnie at 2:44:00 PM