Easter Eggs in my March Viewing 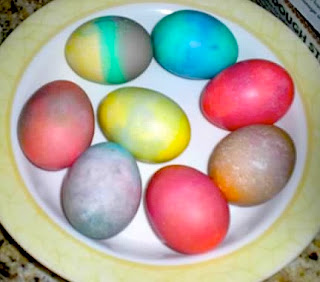 Easter eggs. The wink and nod between filmmaker and audience. The quick quip that slips past censors. The hidden gem...

...and I love finding them.


In honor of Easter, March's Viewing Journal will include a few eggs I caught along with my usual musings. Movies covered include Beloved Enemy (1936), Foreign Correspondent (1940), and Meet Me in Las Vegas (1956). So grab another slice of pie and cup of coffee, kick back your feet, finish that chocolate bunny, and enjoy the reveal.

When I missed my St. Patrick's Day viewing of The Quiet Man (1952), Beloved Enemy became my substitute for an Irish celebration. The film takes place in 1921, during the final days of the Irish War of Independence. The story chronicles how Irish rebel leader Dennis Riordan (Brian Aherne) and British Lord Athleigh (Henry Stephenson) become catalysts--albeit separately--in bringing peace to their warring nations. They are linked by Lord Athleigh's daughter, Lady Helen Drummond (Merle Oberon), with whom Riordan falls in love. This gives the film a Romeo/Juliet vibe.

The inspiration behind the Riordan character is thought to be Michael Collins, an Irish rebellion leader during the aforementioned war. The filmmakers must have sensed audiences would see this parallel, so right out of the gate, they hit their viewers with a disclaimer:

In other words, don't get tied up in historical accuracy as it's not the point of the film. Research on Michael Collins reveals a much more complex story and confirms the declaration that the "story is not taken from the pages of history." The love story between the Irish rebellion leader and English Lady is complete fabrication, but if you're viewing for the fantasy, this should not interfere with your enjoyment.

And what a fantasy! Oberon's beauty is stunning, her voice tender and lilting. Aherne is a cutie, and if you are into accents, his Irish one makes him downright sexy. 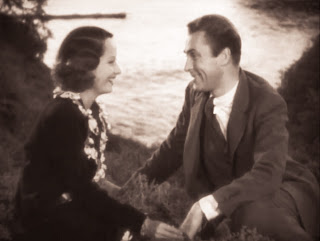 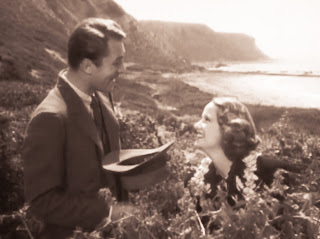 While some movies and novels cut away from sweet nothings shared between lovers, Beloved Enemy invites the audience into the couple's reverie. Smart choice. The passion between Riordan and Lady Helen is palpable as Riordan shares his vision of a future together had their nations not been at war. 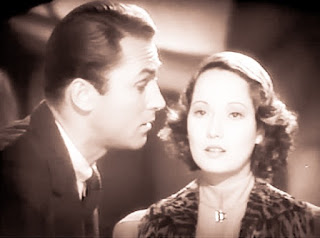 The two kiss. The scene fades to black. Here we find the filmmakers' first Easter egg. Notice Lady Helen's buckled blouse prior to the fade out: 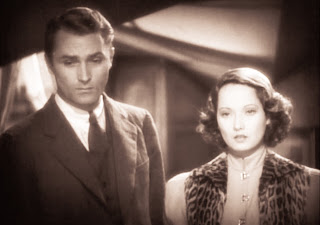 Side note: Take a moment to appreciate Aherne's and Oberon's acting here. Their expressions convey how distraught and hopeless the characters feel at this moment. Beautiful.


When the scene returns, Helen's blouse is very much undone, leaving us little doubt as to what happened between scenes. 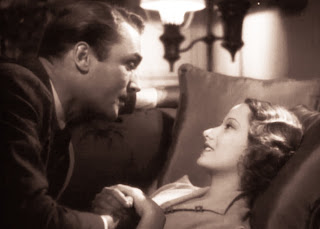 The second gift from the filmmakers comes from the mouth of David Niven's character in regards to his new girlfriend: 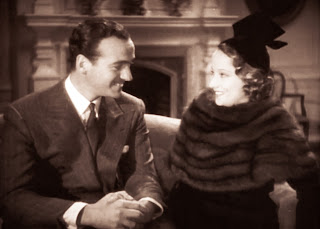 
The line is inconsequential to the overall plot, thrown in to let us know Niven is no longer pursuing Oberon. (Not that it was that hot of a pursuit in the first place.) But it is a juicy piece of dialogue, slipped past the censors.


* * *
A theme of self-sacrifice for the the greater good surfaces when both Riordan and Lady Helen reluctantly vow to forego their romance and no longer see each other. 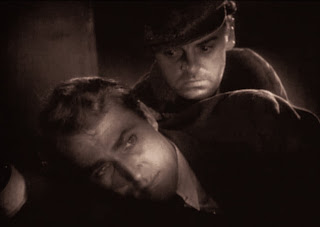 At fellow Irish patriot Tim O'Rourke's (Jerome Cowan) urging, Riordan pledges loyalty to the cause over a woman. 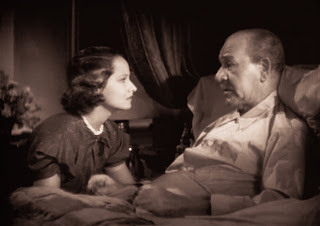 
Lady Helen breaks her promise when she goes to Riordan to plea for his cooperation in a peace treaty between the Irish Republic and Britain. 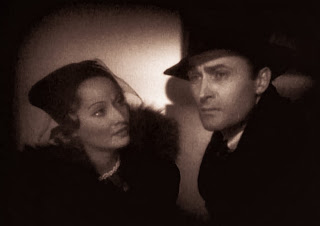 Lady Helen explains that a truce would mean the end of needless deaths.
He listens to her reasoning and concedes though he knows a vote for peace means death at the hands of his radical colleagues.

This is where the movie shortchanges us. Sort of. The film would be more powerful if Riordan completed the self-sacrifice with his death. However, the studio gives the 1936 audience what they want: a happy ending. In my opinion, though, the ending is rather vague. Sure, Riordan and Lady Helen speak of the realization of their dream future, but so did Marguerite and Armand in Camille (1936). As far as I can see--and I have viewed the film several times over the years--Riordan's survival is not definite. And this is perhaps the greatest gem of the movie. The screenwriters allow the studio (and any willing audience participants) to believe they have their fairy tale ending, yet still uphold the integrity of the story.

In support of our school field trip to the Don Quixote Ballet, I opted to show Foreign Correspondent during Drama Club movie lunches this month. The two stories are connected by key plot points which involve windmills. As you may recall, one of the most memorable scenes from Miguel de Cervantes' novel is Don Quixote's battle with a windmill. In Foreign Correspondent, suspicious windmill activity tips off Johnny Jones (Joel McCrea) to the whereabouts of Van Meer and his kidnappers. 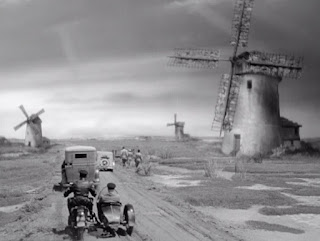 Scenes from Foreign Correspondent - Great for building background knowledge before going to the ballet. Many students had no idea what a windmill was. 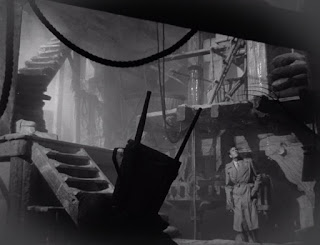 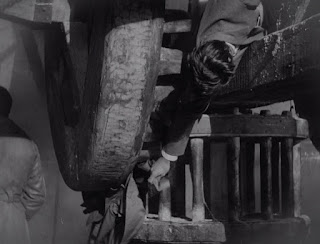 The students struggled to follow the plot and keep track of the characters. (In their defense, it takes us several lunches to get through a movie, so the kiddos are up against that.) They enjoyed the car chase, which they thought was well done--quite a compliment considering the CGI they are accustomed to seeing! They also enjoyed the suspense Hitch creates while Johnny's "body guard" looks for an opportunity to murder him in the tower. Because it was so completely unexpected, they were thrilled with the final twist when the plane gets shot.

I held back on sharing Hitchcock's Easter eggs with my students, so they could focus on the plot. I was relieved when they couldn't follow Carol's (Laraine Day) speech after she thinks she has discovered what "sort of person" Johnny is. 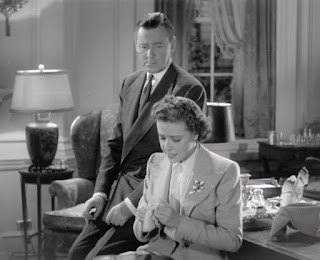 "When we got there [the hotel] I found out that he wanted to... Well, you see, we had been joking about it. When I heard him book the extra room, I knew he meant it. Such a cheap trick."

The main Easter egg is the director himself. 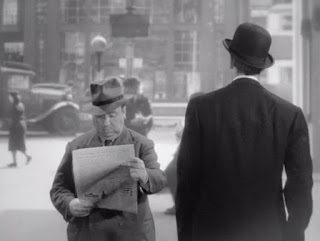 My students found the second Easter egg, though they didn't understand the significance of it at the time. As McCrea's character escapes his pursuers, he knocks out the power of the "E" and "L" in the hotel's signage. 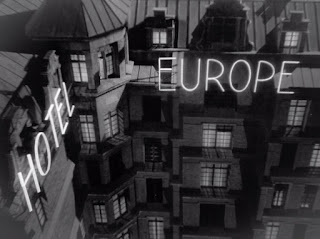 Hitch's wake up call to the United States couldn't get much clearer than the resulting sign: 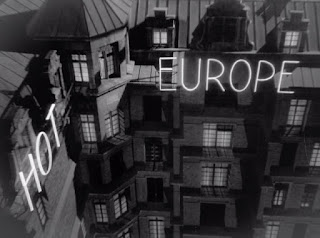 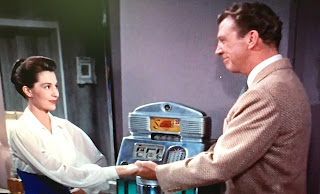 
My final find is a hidden gem among a host of star cameos in Meet Me in Las Vegas. Debbie Reynolds, Tony Martin, Jerry Colonna, Lena Horne, Vic Damone, Sammy Davis Jr.'s voice, and Frank Sinatra all make an appearance, but what excited me most was spotting dancer George Chakiris, who was billed as George Kerris: 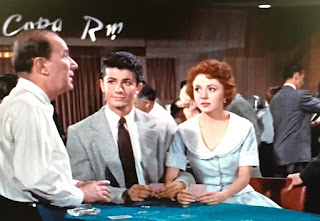 Five years prior to portraying the leader of the Sharks in the film version of West Side Story (1961).