With only a few days left until the annual TCM Film Festival, I have this year's theme, History According to Hollywood, on the brain. I go back and forth on my film choices, wanting to hear the discussion connected with the "herstory" films, but also wanting to see old favorites on the big screen. Since this will be my first time attending the festival, I opted for the Palace Pass. This means I'll be missing out on the TCM Club exclusive panel "Facts and Fiction: Whose Responsibility?" hosted by Jeanine Basinger (my author idol!) and Jeremy Arnold. Hopefully some of the bloggers I read will attend, so I can hear secondhand what was discussed.

The films chosen for analysis include 1776, Young Mr. Lincoln, The Miracle Worker, Apollo 13 and many more set in an era prior to the film date. I am equally interested, however, in the way Hollywood shapes history through the portrayal of current events of the day. As one example, I think of the ticket-a-dance halls, popular during the 1920s and 1930s, but long since extinct. Lacking the libraries of in-depth research found on the American Revolution or Abraham Lincoln, we are left with the story Hollywood has bequeathed us, a few frames of celluloid, and Lorenz Hart's lyrics to "Ten Cents a Dance." Depending on the circumstances under which they were created, the story may reflect different shades of truth.

I can't recall my first exposure to ticket-a-dance halls, but I do remember being enchanted with the idea of dressing in glamorous gowns and being paid to dance. An added bonus: I would never be lacking a dance partner. In hindsight, my happy go-lucky attitude may have been naive. At the time, visions of a hunky Randolph Scott purchasing dance tickets, Harriett Hillard's bias-cut dress, and a dancing contest with Fred Astaire and Ginger Rogers played in my head. How could I have known any better?


Later I saw Barbara Stanwyck's portrayal of a taxi driver. The dresses were less fabulous, the shoes and stockings wore through each night, and the job zapped every ounce of life in the dancers. Stanwyck's character was hardened, but she found her "hero" on the dance floor nonetheless. Doris Day's Ruth Etting showed an even grittier side, fighting off a tough guy at the beginning of Love Me or Leave Me (1955) and losing her dance hall job in the process. Suddenly the full meaning of the Hart's lyrics began to take hold: 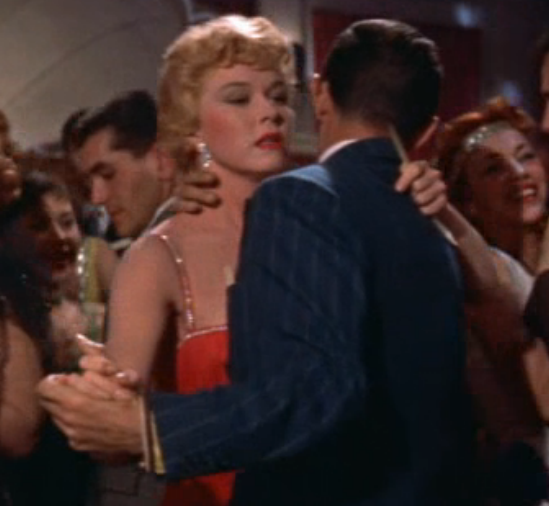 Ten cents a dance, that's what they pay me.

Gosh, how they weigh me down.

Tough guys who tear my gown.


*as sung in Love Me or Leave Me; however "pansies" is used in other versions of the song


Somewhere between dancing with Fred and fighting off sleazy guys is the truth about dime dance halls. Consider my curiosity peaked.

Since then, I have kept my eye out for depictions of taxi dancers. I plan to explore these in future blog posts (maybe a monthly column of sorts). On the menu is a film I caught in January, These Glamour Girls (1939) starring a young Lana Turner, and the short "Asleep in the Feet" (1933) which Danny from Pre-code.com recently reviewed on his blog.

I also did a bit of research on dime-dance halls, which yielded mixed opinions. According to some, taxi dancing was the positive experience I first imagined, where gals who loved to dance could make a better living on their feet than as a secretary, and out-of-town strangers could easily make new acquaintances.


Fighters and sailors and bowlegged tailors

Can pay for their ticket and rent me.

Others explain that the dance hall was friend to the social outcast, admitting men regardless of race, ability, and occupation. Still others point out the presence of actual prostitutes among the dime-a-dance girls. If this was the case, it wouldn't be a large leap for the patrons to assume their "rented" partner--prostitute or not--owed them more than a friendly dance.

So the dance hall verdict is still out, but deciphering fact from fiction is part of the fun. Hope you can come along for the dance.