Nobody knows what is true and what is false about me anymore. I'm not sure that I know myself anymore. (105-106) 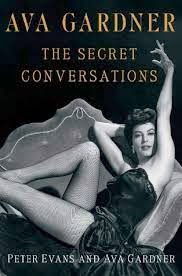 I admit that when I asked for Ava Gardner: The Secret Conversations last Christmas I was enticed by the advertising lure that these were secret conversations, so secret that they couldn't be printed until after Ava's death. After finally getting around to reading the book, I'm not so sure this marketing maneuver is all that accurate. Ava was not exactly tight lipped when she had a few drinks in her, and the stories she told had the aura of being her standard party modus operandi, a hint of crude humor with the intent of shocking her listener. (Peter Evans, the co-author, notes when she repeats a line he has heard before that  "[s]he even made it sound like the first time she had said it" (85). In other words, the material she shares is not exclusively for him; rather it is a well-seasoned act.) I have a feeling that most of the info revealed could have been discovered through third party interviews. However, there is no substitute for witnessing firsthand Ava being Ava.

The book captures the essence of Ava, a mixture of toughness and insecurity. She mixes expletives with "honey" and "baby." She is an old Hollywood dame with a cigarette in one hand and a glass of wine in the other, telling you like it is--the hell with it. But then again, not really how it was, how she wants to remember it to be:


I'd just rather not have to remember all the shitty things people have said and done to me. I'm happier not remembering, baby. Little of it seems pertinent now, anyway. Why can't we settle for what I pretend to remember? You can make it up, can't you? (59)

Throughout the "conversations" (so called because she did not like the idea of interviews), Evans and the reader must keep this quote in mind. Ava can be very convincing, but being a studio system actress at heart, she always has her image in mind. She doesn't want to appear to be a "nympho" when she and Mickey Rooney were still "doing it" while in the middle of their divorce (73). She is afraid that she will be seen "in a bad light" when the public learns that she was sleeping with both Rooney and Howard Hughes during the same period of time (259). She is also concerned about including too many expletives: "It makes me sound like a fucking fishwife" (88) and "Why does she have to swear all the goddamn time? It makes her sound like a goddamn tramp" (255 - Ava referring to herself in the third person). I find myself chuckling out loud at the irony of the two statements.

While Ava worries about disclosing information that will make herself and others look bad, what is really divulged is her struggle with inner demons, a kind of insecurity a la Sunset Boulevard (which Evans himself observed - 102). She desperately wants to be blissfully ignorant, to remember events in a way that is flattering to her, unwilling to give up the images that were created long ago. Yet she is conflicted because unlike Gloria Swanson's character, she knows that she is intentionally trying to deceive herself. She wants to be told she is beautiful while at the same time acknowledging it is no longer true; she describes her beauty in past tense (83-85). Evans describes it best when he tells of what he has learned about old movie actresses:

Their vanities, and insecurities. The self-protective fibs they all tell. The delusions they have about themselves. (174)

The book is by no means a thorough biography. Ava stopped the project just as they were approaching the Frank Sinatra years. There are juicy tidbits about the seedier side of Hollywood: young actresses dating gangsters (Hollywood was full of them in those days per Ava), starlets who had to "put out" at the end of the month when the rent was due, publicists who could make dirt look clean, and a studio that "never missed a trick" (110, 152).


The book also gives insight into the writing process and the lengths authors go to in order to get their readers that coveted story. Evans was essentially on-call 24/7 and had many late night/early morning phone calls with Ava, who did not sleep very well. He lived in the constant fear that all the work would be for not as she continually threatened to not go through with the book. Additionally, Ava preferred to talk about memories as they came to her, which meant quite a bit of piecing together on Evans' part. As a result, the book tries to, but is not always successful in maintaining continuity. Evans was also up against Ava's memory, which--as aforementioned--was not always accurate. For example, she claims to have never cheated on any of her husbands, but later reveals that she slept with a bullfighter while married to Sinatra (237).

In the end, the book is not so much a biography of Ava Gardner's life as it is a documentary on how an aging Hollywood goddess comes to terms with her past and present. It's the perfect reality companion to the fictional Sunset Boulevard.

This review has been part of: